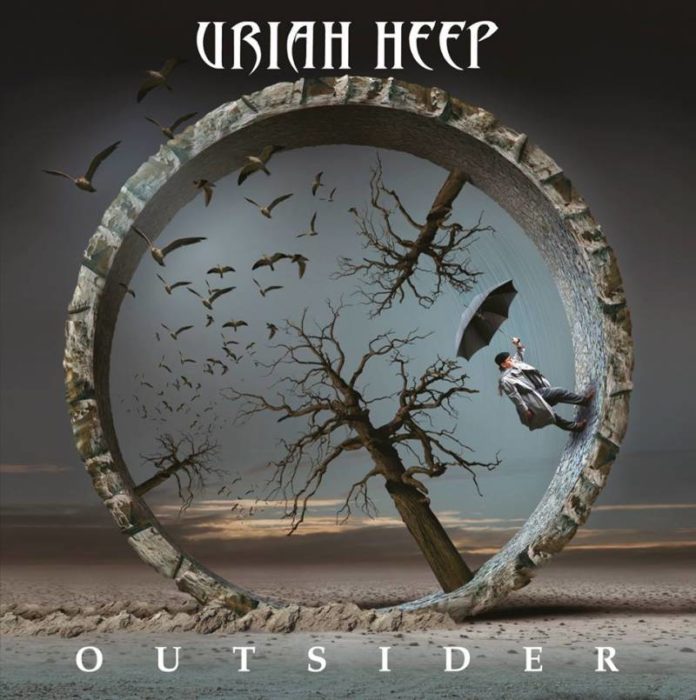 Uriah Heep are easily one of the most influential and important bands in rock and roll history; often listed as one of the “Big Four” of hard rock (alongside Black Sabbath, Led Zeppelin, and Deep Purple), Uriah Heep have the distinction of having been a working unit since the 60’s. The music has often been heavy on the keyboards, the vocals can almost be described as operatic, and Mick Box’s guitar work has always been a highlight on all of the band’s material. There’s been some contention over the years as to whether or not the band qualifies as heavy metal. Although some say that they are simply a hard rock or a progressive rock band, I say that if Led Zeppelin count as metal, so do Uriah Heep.

Outsider is the latest effort by Uriah Heep, and it is their 24th full length album overall, which is quite an impressive number; this also marks the first album with the band’s new bass player, Dave Rimmer, who stepped in after Trevor Bolder passed away last year. “Speed Of Sound” kicks things off with an intensity that makes it hard to believe that they have been around for 45 years already; Hammond organ is in full blast, guitar riffs have a good crunch to them, the bass is playing an infectious galloping rhythm, drums sound larger than life, and Bernie Shaw’s vocals are as good as ever.

Although, as I mentioned before, Uriah Heep have a lot of keyboard in their sound, which might be a turn off for those looking for a heavier tone along the lines of Black Sabbath, don’t count write them off just yet, as the vocal harmonies and guitar work also play an important role (just check out the guitar riff on “The Law,” and the vocal harmonies on “Is Anybody Gonna Help Me?” and you’ll see what I mean). At times I’m reminded of Burn-era Deep Purple; the way the rest of the band harmonize with Bernie Shaw, the keyboards harmonizing with the heavy tone of Mick Box’s guitar, and the huge drums contribute to a super tight sound that could easily go right along with the best cuts on that Deep Purple classic record.

The production is handled by Mike Paxman, who also produced the previous three records, as well as some live material and DVDs for the band, and proves himself to be a wizard behind the mixing board. Uriah Heep have developed their sound over the years, but still have firm roots in the 70’s (arguably the most important era for the band), and a good producer is an absolute necessity in order to keep things up to date and relevant for today’s market. Although at times it sounds as if the keyboards want to overpower everything else, they get reined in when the guitars light up the soundboard, and complement each other in much the same way that the drums and bass complement each other, and the vocals harmonize perfectly. The mix couldn’t be any more spot on, and it really brings the crunch of the guitars out, showing that Mick Box is certainly still a force to be reckoned with in the metal and hard rock world.

Uriah Heep have arguably never been as successful internationally as they were in the 1970’s, but they’ve developed a bit of a cult following over the years, and have released surprisingly consistent material since their inception. Outsider is yet another crowning achievement from one of the pioneers of heavy metal and progressive rock, and deserves your undivided attention. Although there are still plenty of the conventions you’d expect from a band who have been around since the late 60’s, Uriah Heep still manage to sound refreshing and new, without compromising their own sound. Newcomers who manage to soldier through the constant keyboards will be rewarded for their efforts and enjoy this album as much as Uriah Heep‘s long-time fans certainly will.