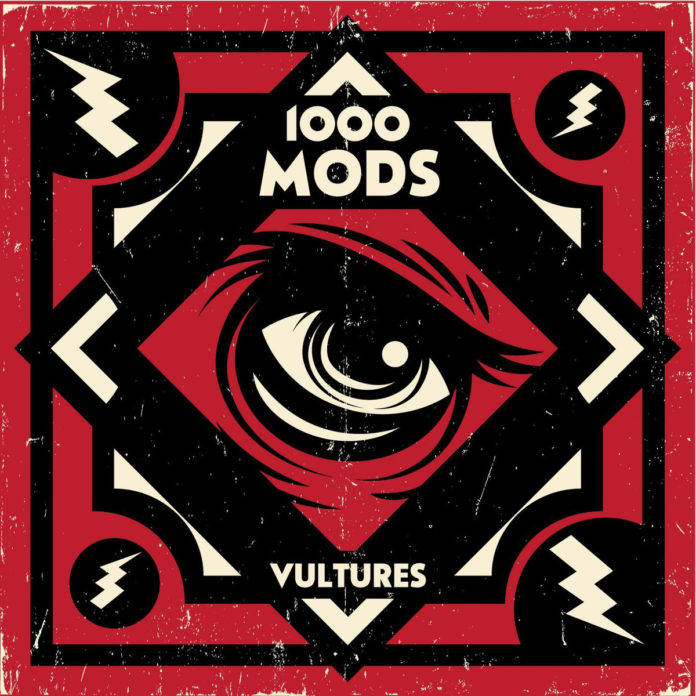 Greece has produced a pretty wide variety of metal bands over the years, ranging from power/symphonic metal artists like Gus G. and Firewind, to more extreme bands like Septic Flesh and Rotting Christ. One genre that hasn’t really been widely represented is stoner rock. with only two bands coming to mind in this department, Lord 13 and Nightstalker. 1000mods hope to change that.

In the first 10-15 seconds of “Claws”, the first song on Vultures, you immediately pick up on the Kyuss influences that are dominant on this record; after all, they, together with Blue Cheer and Monster Magnet, are all cited as influences by the band. The guitar tone is super fuzzed out, the drums have a swing and shuffle to them, the vocals remind me of John Garcia from Kyuss, and the bass work keeps the rhythm going.While the energy and power you’d expect from a modern stoner rock album is definitely here, 1000mods also like to lay down the kind of good slow groove that sounds like it’s being played be a group of, well, stoners. “Big Beautiful” is a great example of what I’m talking about; the verse riff has a 70’s psychedelic vibe at the beginning, until the band explodes into a crushing groove, accented with yelled vocals and super distorted bass guitars. Bassist/vocalist Dani shows his versatility, going from a lower register, gravelly kind of croon, to a really guttural howl that sounds like Chris Cornell’s scream, and matches the music and mood perfectly every time. All of this notwithstanding, while 1000mods have a better sense of dynamics than most stoner bands, the song-writing is a little too average; on most of the songs, you get the feeling you’ve heard the riffs and vocal melodies before, making the songs quite forgettable.

The production also appears as a weak point, failing to deliver a good kick when the band reaches the peak of the volume swell. The mixing is a bit grainy, which although I’m sure is meant to give it that 70’s feel, makes things sound a little flat and lifeless at times; while I would normally prefer the tone on a stoner album to sound a little scratchy, never at the cost of volume and clarity, which was sadly the case here.

While fans of the stoner genre, in particular Kyuss and Monster Magnet, will find a lot to like on Vultures,  in the end a flat production with run of the mill songwriting both keep it from being a classic. 1000mods have a great sound and are definitely on to something, but I’d like to see them work towards differentiating themselves from their influences. They bring some great dynamics to the table, and mix psychedelic rock with stoner rock pretty well, but have a little more work to do if they want to turn more heads in a genre that’s already a bit over-saturated.