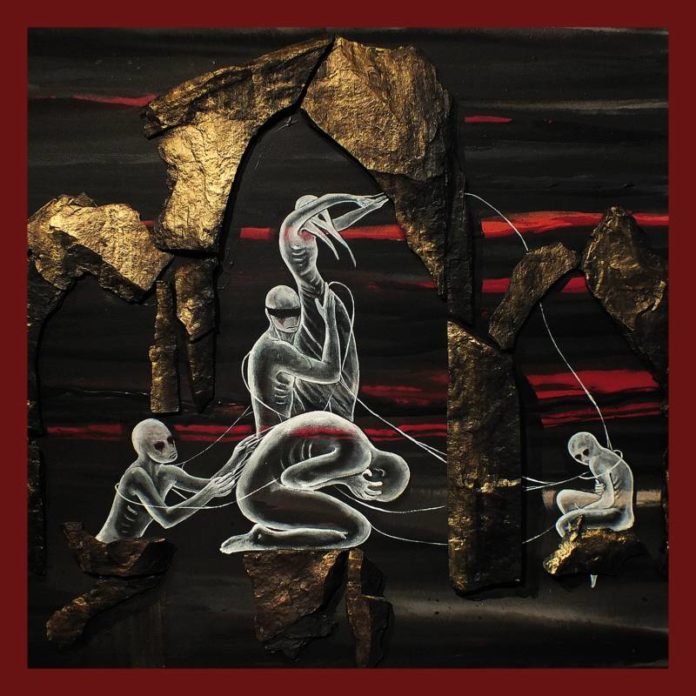 From two opposite ends of the French extreme metal scene, the occult black metal of Blut Aus Nord and the brooding drone behemoth of P.H.O.B.O.S join forces on the mighty Triunity. A split full-length between the two (Blut‘s first since 2007, and P.H.O.B.O.S‘ first ever collaboration), Triunity is an ambitious union of France’s two most acclaimed experimental artists working closely together to create a monumental set-piece of visceral, archaic avant-garde metal.

Unlike other star players in the French metal scene, both artists on this record have stood out from their contemporaries and earned the respect of the underground for their heavy emphasis on experimentation and rejection of trends and tradition in extreme metal. They have not paid tribute to the bleak savagery of Peste Noire nor the empheral beauty of Alcest, rather opting for muses from outside the spectrum of metal. Triunity demonstrates this fully, by showcasing both bands with some of their most experimental pieces.

Blut Aus Nord‘s side bursts open with the battering ram of ‘De Librio Arbitrio’. At a crawling, sludgy pace, the band brings the heaviness while balancing it with their acclaimed avant-garde sensibilities. With mystic choral synths and unsettling, ‘Twin Peaks’-esque ‘backwards-forwards’ whispering narrating the song, Blut captures a disturbing, gothic atmosphere that is experimental and progressive, but that at the same time also features elements of more ‘accessible’ genres, such as symphonic metal. Fans of the project’s recent 777 trilogy will be pleased to hear that the cosmic, otherwordly dirges and lush, textured soundscapes return on Triunity, after the more straightforward sounds of Debemur MoRTi earlier this year, but taken to a much grander-sounding scale. ‘Hùbris’ resembles early Godflesh with sections of repetitious, pounding guitar chugs, before building to a monstrously vast crescendo of swelling aural chaos. It is powerful, monumental and truly one of the more unforgettable moments in Blut Aus Nord‘s catalogue.

P.H.O.B.O.S‘ side resembles more of his earlier works like Tectonics, favouring a mix of experimental metal imbued with retro industrial and electronic blips that almost call back to EBM. P.H.O.B.O.S displays the most diverse sonic palette on the split, sprinkling a multitude of bizarre sounds, synths and samples across each song. As bizarre as the compositions can be, they create a uniquely grisly, almost space-age mood that creeps and stalks, like a predatory alien lying in wait for its prey. It’s the most ‘out there’ the project has ever been, and a unique spot in the discography, even if most of the songs meander without any direction or structure, save for slow-burning climax of ‘Ahrimanic Impulse Victory’.

What’s most impressive about this split is how closely both projects seem to have worked together. While split releases often suffer due to artists working in isolation, Triunity feels more definitive, with recurring motifs in the instrumentals as well as each band borrowing elements from each other to expand their sound. P.H.O.B.O.S‘ side is the more avant-garde and challenging to the listener, akin to the work of Blut Aus Nord, who in turn borrow their counterparts’ drone metal aspects for a heavier sound. Despite its shortcomings, Triunity is worthy of praise for its audacious experimentation and close-knit collaboration, which threads together both artists seamlessly. It’s a daring record for its audiences and opens up a ton of new possibilities for both Blut and P.H.O.B.O.S.