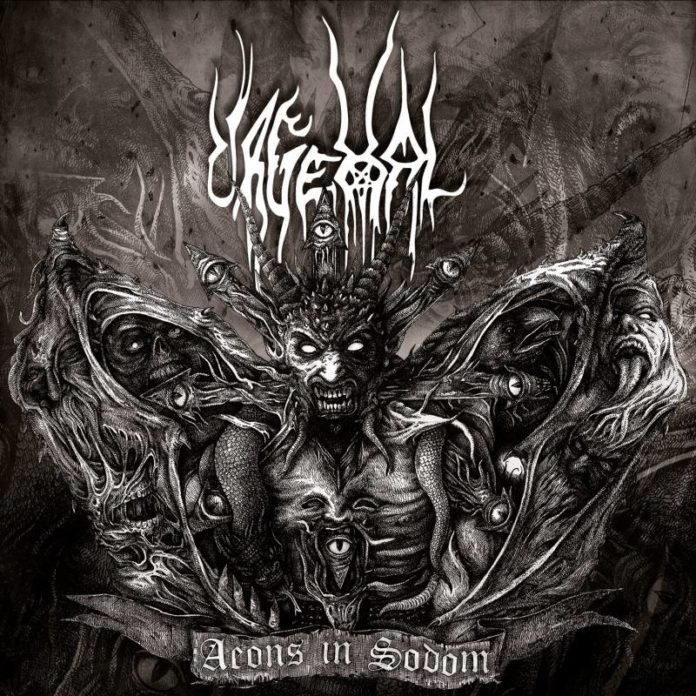 The underground black metal scene lost a great musician in 2012 when Trondr Nefas, vocalist/guitarist of Urgehal, tragically passed away. Formed in 1992, Urgehal played a raw, aggressive form of black metal similar to the other bands in the early Norwegian black metal scene, though they also list old-school thrash, death, and speed metal as being influences. Although, throughout the years, there were many line-up changes, they did not stop the band from producing some essential releases for any black metal fan. The untimely passing of Nefas, however, changed it all, and effectively ended the band.

Aeons In Sodom serves as both a tribute to Nefas and as a final chapter for the band. Half of the material on the record was written by Nefas before his passing, while the rest was written by long-time guitarist Enzifer as a way to honor his bandmate’s memory. Vocals and additional instrumentation are provided by an impressive selection of personal friends and bandmates of many of Nefas’ other projects. It’s a virtual “who’s-who” of the Norwegian black metal scene, including members of Darkthrone, Taake, Shining, Carpathian Forest, and Tsjuder.

Despite the large number of guests, Aeons In Sodom manages to not sound like a mere compilation, thanks in great part to the solid production. As aggressive as ever, each track pounds the listener with a tidal wave off blackened riffs, and stunning vocal performances from each of the guests. “The Iron Children,” featuring Nocturno Culto from Darkthrone is a particularly cool moment, and sounds like it could have been a track from Sardonic Wrath. Darkthrone were always cited as a big influence for Urgehal, so it’s a bit chilling hearing Culto’s vocals alongside a pre-recorded solo from Nefas, a mash-up which truly highlights how effectively the production was handled. “Psychedelic Evil” is another high-point, featuring some truly fierce vocals from Nag of Tsjuder, as well as howling guitar solos from Diabolus of Vulture Lord.

With the amount of musicians present on Aeons In Sodom, it’s pretty impressive that all of the songs sound like they were recorded in the same session. If you know anything about recording, you’ll know that is extremely difficult to capture the same sound quality on album that was recorded in multiple sessions. As I mentioned earlier, there are a few pre-recorded solos from Nefas which are mixed in flawlessly. The tight performances from the remaining members of Urgehal and the guests manage to make Aeons In Sodom a pretty befitting tribute, and a bitter-sweet (but strong) final statement for the band. While Urgehal fans will certainly want to pick this record up, fans of Norwegian black metal in general will also love it, as it works almost as a mix-tape featuring some of Norway’s finest. Go pick up a copy now!

IN A NUTSHELL
A fitting tribute to fallen frontman Trondr Nefas, Urgehal finish their career on a high-note, with a little help from some friends.
Reader Rating0 Votes
POSITIVES
Lots of notable guests turn in top-notch performances alongside the band
Excellent production
NEGATIVES
No real negatives to speak of
5