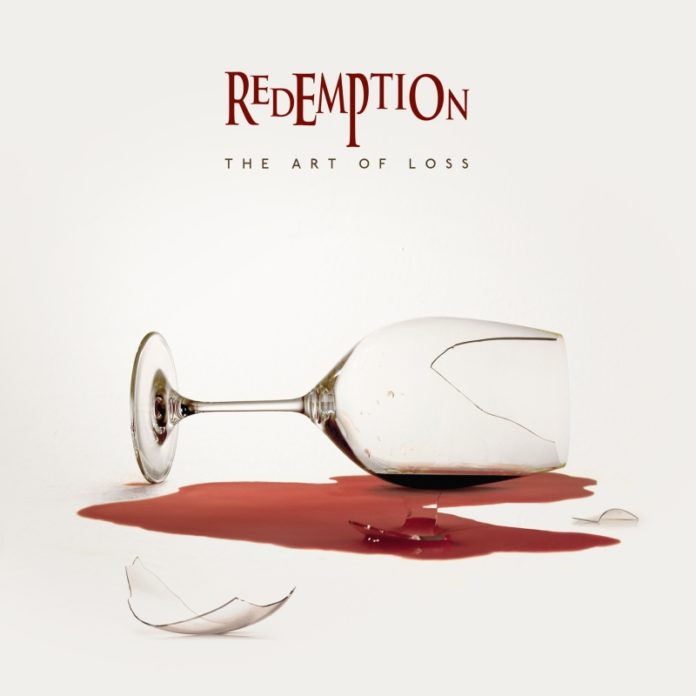 Presented to us simply as prog metal (which may be true enough of past albums), on The Art of Loss, Redemption come across more as power metal with a strong dose of prog, putting them closer to the realm of Artension and Twilightning than, say, Shadow Gallery or In The Woods….

Guests on guitar (Marty Friedman, Chris Poland, Chris Broderick, and Simone Mularoni) and on vocals (John Bush) play up the technical aspects of the music, which are, admittedly, pretty impressive. On the downside, everyone seems more interested in playing around with the trappings of prog metal from decades ago, instead of pressing forward towards something fresh. Spangly guitar lines, solos of shredding, and clusters of keyboard all operate nicely on an individual basis, but when everything comes together at once it often happens that they blend into each other, becoming something with less character than the sum of its parts. There are some exceptions, with cuts here and there running crescendos and supported solos to solid ends, but they’re in the minority.

There’s a very positive attitude animating much of the music, which guitarist/keyboardist Nick van Dyk sums up as addressing the importance of choosing love over fear (put forth clearly in the track “Damaged” with the lines “The only conclusion / Is love over fear” and “Please recognize that love must conquer fear”). With one guitarist (Bernie Versailles) taking time off for medical issues, and van Dyk himself having previously experienced a “cancer scare,” faulting them for wanting to accentuate the positive feels a bit petty. However, the band’s apparent efforts to recontextualize clichés do them few favors, with lines like “All we have is falling apart / The center cannot hold”, “Hope has no plans of going / Quiet into the night”, and “We’re only given so many sunny days” making it difficult to not roll your eyes at least a few times along the course of the album. There are even occasions (perhaps most clearly on “That Golden Light”) in which the starry-eyed lyrics and clean tones make them sound passable for an exceptionally tech-inclined Christian metal band. That’s not necessarily a bad thing, but a description of what newcomers might expect to hear here.

Inclusion of the ambitious (and approximately 23-minute-long) closing track, “At Day’s End”, preceded by a cover of The Who‘s “Love Reign O’er Me”, brings the already packed album to around 75 minutes total. Incorporating a few melodies from classical pieces (in true power prog fashion), and bringing some skittering electronics to bear in other parts, it’s the most modern-sounding track in The Art of Loss, but also the most protracted exposure to the sappy lyrics.

While there are few instrumental flaws to be picked out, it’s hard to identify any points of the album that would make it a big draw for those not specifically looking to get some of their cheesier prog metal longings satisfied. One of my bigger turn-offs (the virtually unceasing sunniness) could be a big point in its favor for others… so, to put it in terms that Redemption might use, just do what your heart tells you.

IN A NUTSHELL
Not for everyone, but if you want your metal uplifting and heavily ornamented, give it a shot
POSITIVES
Strong performances when considered individually
Good use of energy
A sense of ambition even when they don't quite pull it off
NEGATIVES
The adaptation of lines from poems, idioms, and introductory philosophy has a lessening effect on the work put into the instrumental side of the music
4