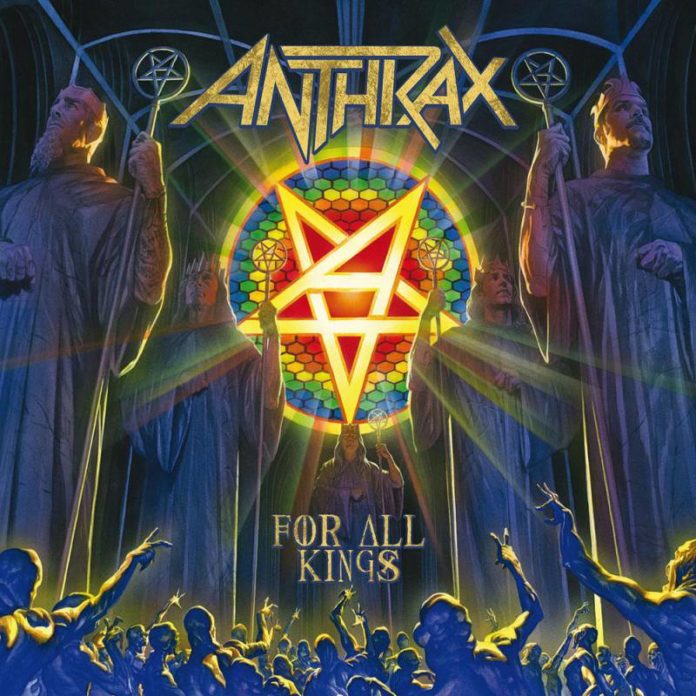 2011’s Worship Music was a welcome return to form for Anthrax, with fans praising the mature tone and heavier feel. I was certainly happy to see vocalist Joey Belladonna’s return since, in my opinion, the band’s best material was written when he was in the line-up. That’s no slight to Jon Bush, but it’s hard to argue anything of the Bush era being better than Among The Living or Persistence Of Time. Worship Music showcased a rejuvenated Anthrax, riding the momentum built by their participation with the “Big Four” in Sofia, Bulgaria. After 5 years of relentless touring, and yet another line-up change (departure of lead-guitarist Rob Caggiano, who was replaced by Jonathan Donais of Shadows Fall) now Anthrax return with For All Kings.

Anthrax still thrash as hard as they did in their early years, as can be heard on speedy numbers like “Evil Twin” and “Suzerain.” For All Kings makes it clear, though, that Anthrax have matured as musicians, though there are still hints of the groovy sound the band created back in the 90’s, like on the mid-paced “Defend Avenge.” Joey Belladonna’s vocals give each track a larger-than-life feel, and give the groovier songs an extra element that has been missing for a while now. Jonathan Donais proves himself to be an excellent replacement for Caggiano on the lead guitar, with some seriously jaw dropping solos throughout the album.

I admittedly found myself gravitating towards the speedier tunes, being a fan of the band’s early works. In much the same way that Metallica aren’t going to release another Ride The Lightning, Anthrax aren’t interested in revisiting old ideas. There is plenty of thrashy tracks on For All Kings, but some of the mid-paced numbers feel a little too much like filler, despite the band’s solid musical performance. “This Battle Chose Us” is a great example of this; the opening riff is heavy, and mid-paced, but by the time the chorus rolls out it all feels a little dialed in. “Zero Tolerance,” on the other hand, is vintage Anthrax, with its frantic pace and snarling attitude. The slower tracks aren’t bad, honestly, they just kind of bog the overall album pacing down at awkward moments. A slightly altered track arrangement would probably work wonders for this record.

The production is super clean and modern sounding, but still manages to capture the spirit of the music. Although on the faster numbers there isn’t much bass in the mix, thrash fans will probably be used to that anyway. Joey Belladonna sounds massive, and is often accompanied by Frank Bello (bass) and Scott Ian (rhythm guitarist) on backing vocals.

There is a lot to like on For All Kings, and it’s cool to see Anthrax still carrying the thrash torch high. Consider it a victory lap for not just the band, but the genre as a whole. The slower moments might not suit fans looking for more of the early sound, but even the slower pieces have some pretty solid musicianship. Anthrax have put out a pretty enjoyable record with some memorable songs, so go pick up a copy today!

Blessed Black – Beyond the Crimson Throne