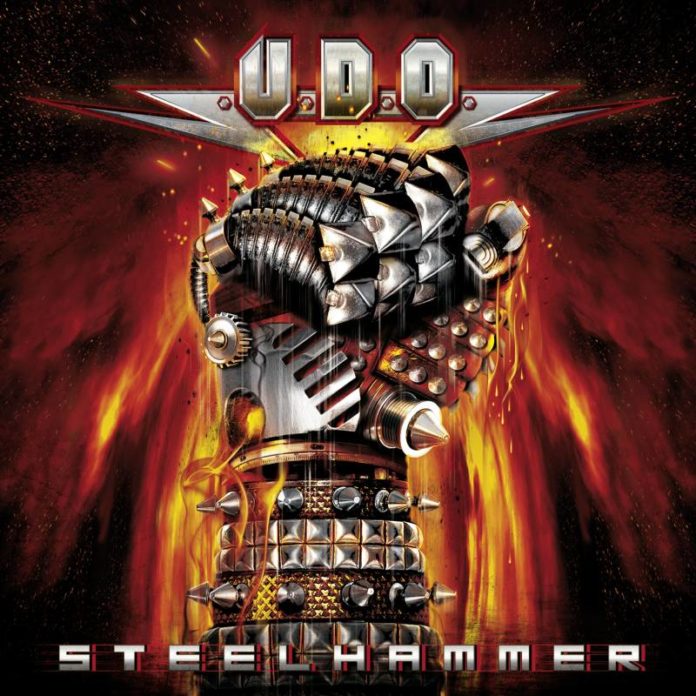 That one question will always loom over U.D.O.: are they as good as Accept?

With such a classic band firmly in frontman Udo Dirkschneider’s past ((not that I can see in to the future… or can I?)), it will always be a thought that rests in the back of everyone’s minds. While the band has certainly stumbled once or twice, they have also produced albums that are at least up to the caliber of Metal Heart or Breaker. They have even produced at least one album that could rival the ubiquitous Balls to the Wall in terms of quality ((1999’s Holy to be precise)). But the question we pose today is how does U.D.O. 2013, with their new album Steelhammer, stack up against Accept’s new-found glory?

Steelhammer sees the band writing adventurous material the likes of which they haven’t attempted since Timebomb. Each track has a patently different feel to it and there are some wild twists and turns to be had. Proceedings kick off with the percussive, raging title cut before cruising into a pair of  more-than-serviceable mid-paced rumblers. The first detour is taken with “Basta Ya”, the band’s first ever song sung in Spanish. It’s anthemic and hopeful, a song about youth leading the way to the future. Though they are far from the first band to attempt a song in a foreign-language, I was pleasantly surprised hearing a track like this from a German band who sing predominantly in English.

Then comes “Heavy Rain”, a track that comes straight out of left field. It’s a piano-based ballad that almost sounds like something that Louis Armstrong might have recorded. I never thought I’d hear a song like this on a U.D.O. album, Udo taking a moment to show his age and maturity. It’s quite an interesting tune in the context of the rest of the album and really fleshes out the product, bringing variety to an otherwise straight ahead metal record.

Not all of the experiments work however. The 8-bit sound effect that is central to “Devil’s Bite” is just distracting in what would otherwise be a solid stomper, and “Book of Faith”, with its symphonic touches, is a bit throw-away. Even in those cases it’s nice to see the band willing to experiment.

So there’s a lot of experimentation for an album of this kind. But make no mistake; this is still a heavy, high-calibre piece of German metal might. That means that patented German sense of groove is on top form. Prime-cuts include the dastardly “King of Mean”, the gut-punching “Timekeeper” and the Russian Roulette bombast of “Take My Medicine”. Toss in the title track, and you have the band’s four nastiest, grooviest bangers since 2005’s Mission No. X.

So the question remains, is U.D.O. able to take on Accept in 2013? While Rev-Raptor may have paled before the mighty Blood of the Nations, I have to say that Steelhammer can, indeed, go toe-toe with Stalingrad. Hell, it might even come out on top.

So let the battle for German metal supremacy continue, and let the fans reap the benefits.

[…] latest studio offering, Steelhamer, was a really good record. Though it had weak points, it was overall one of Udo Dirkschnieder‘s finest post-Accept […]