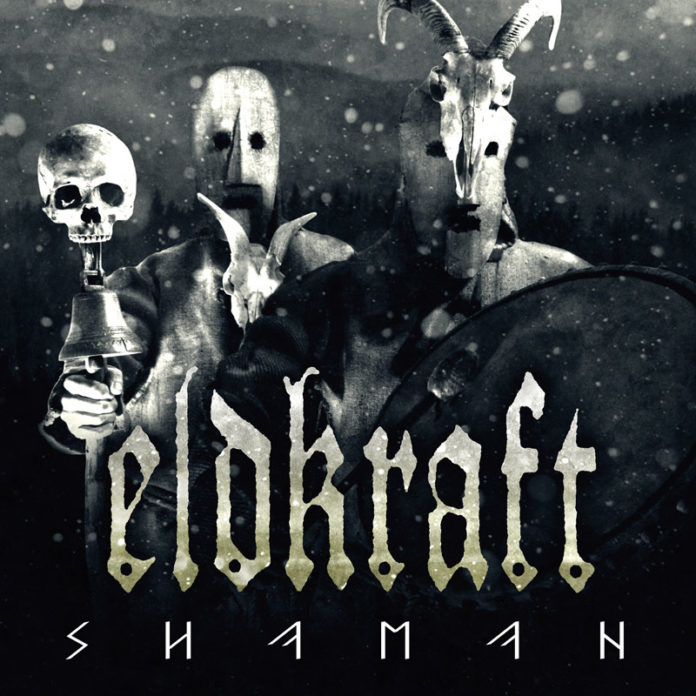 I remember those cold winter days when I would brew myself a warm cup of coffee and enjoy watching the snow cover the ground while listening to, for example, Bathory‘s Nordland I and II. Nowadays there are not nearly as many epic releases that, without the use of grandiose choirs and orchestration, are able to paint such an enthralling image in the listener’s mind. When I came across Eldkraft, and while reading the press release, I began having high hopes for their debut album, Shaman.

The band succeeded in creating a really good atmosphere, mainly relying on the basic instruments along with some additional orchestrations and choirs here and there. This atmospheric approach, still relying upon heavy guitars, works well for Eldkraft, and really brings to mind some of the finest works of Bathory or Primordial. The guitar work really deserves most of the credit, as the mournful and emotionally powerful melodies really shine on this record. The epic atmosphere of the Norse mythology is also expressed through the drums,  varying from blast-beat style in “Gränslös Gräns” to tribal rhythms in “Undrets Tid.” As it draws from several of different musical influences, from early Tyr to Summoning, and even Candlemass, evident in “Fate’s Door”, the album  shows a lot of diversity, while still retaining a touch that makes the songs authentic.

On the other hand, while the vocals really thrive at times, at other times they sound like a parody of themselves. Despite a nice tenor touch, J. Sandin improvises with a bit harsher styles or doom-metal inspired wails, reminiscent of Messiah Marcolin (ex-Candlemass). Still, his performance could have been a lot better without the over-use of superfluous layers, and their arrangement and production should be something the band focuses on more on the next record. While the songs have a lot of potential, they sound almost the same; even though there’s a clear potential here,  the lack of memorable moments (nothing really sticks out) ruins the overall impression.

The bottom line is that although Eldkraft are skilled musicians, there’s definitely a lot of space for improvement in terms of songwriting, vocal production and performance. Apart from that, and the fact that the album needs a stronger hook, we are looking at a fairly solid debut record that might turn a few heads, but is definitely a long way from challenging similar releases by the recognized names of this genre.