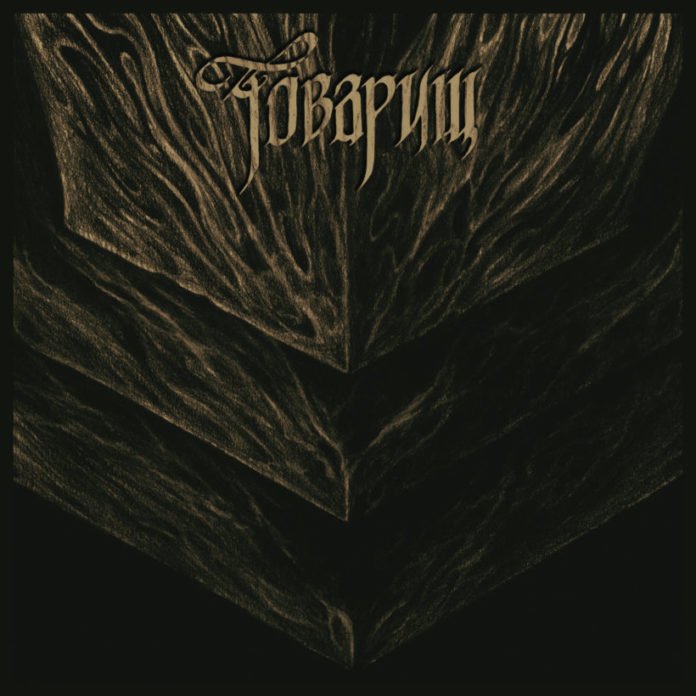 About to celebrate their 10th anniversary, the trio of Tovarish have released their fourth album, boasting a good three-quarters of an hour of music. In the hiatus between this and the last release, their press release says, they’ve been doing remix work for goth and industrial music groups, which has pushed them to experiment more with their base style, including incorporating found sound pieces.

“They Know”, the opening track, does a good job of establishing that mix, with a combination of ethereal synths, rasping vocals, and broad, forceful bass underscorings, all following a protracted sample of police warning protesters of consequences should they fail to disperse. It asserts the realistic dystopian atmosphere with ease, and while the vocals are the least subtle part of the song, they do fulfill the human element role well enough. For the narrative though, it seems like it would have been a good idea to add some secondary vocals to go back and forth.

The rest of the album goes on in a similar vein, but with enough variety to make most of the tracks effectively distinguished from each other, whether through dropping in a Jim Jones sample, darkening the synth atmospheres, focusing on acoustic guitar melodics, or playing up the percussion impacts. Most of the time the vocals are either wordless or so inchoate as to effectively be wordless, and the snarled growls make for an interesting counterpoint to the clean, almost new age style of the electronics. Personally speaking, it doesn’t really convey any message beyond the atmosphere, so it seems like most of the polemic establishment is down to the assorted clips. There is some change-up by the inclusion of guest vocals from Jamie Myers (of Sabbath Assembly) in a pair of tracks, but even there the focus is on tonality instead of verses.

The assorted electronic touches do lend the album quite a bit of fine detail to savor and pick through, but the largely abstract emphasis and structuring of the songs can make it difficult to really hook into what they’re doing for more than a couple of minutes at a time. There’s excellent technique, production, mood control, and intensity on display, but despite the ubiquitous growling, it holds itself at too much of a distance to make much of an emotional impact.

I’m more disappointed than I’d expected with the final evaluation, and it’s because the band puts such impressive work on display in the moment-to-moment portions. When the music as a whole hangs together so loosely, a large chunk of that effort seems to go to waste, and trying to second-guess how they could have made it work (One big track? Different vocal tones for each movement? Collapsing it via overlays into an EP-length composition?) is frustrating as well, because it seems like Tovarish have the skills to make any of those approaches work. It might be that, despite their evident interest in offering some challenging socio-politically-grounded extremity, the best way to enjoy this album is to put it on in the background and not think too much about it.

THE BOTTOM LINE
Not the most engaging melding of dark electronics and metal, but the skills on display go a long way to encourage attentiveness despite that
Reader Rating0 Votes
POSITIVES
Strong handling of atmosphere and small details
Great production
Good balance between large- and small-scale work
NEGATIVES
Too atomized to really build momentum
Probably would have been more effectively focused if they'd built the album without the vocals
4