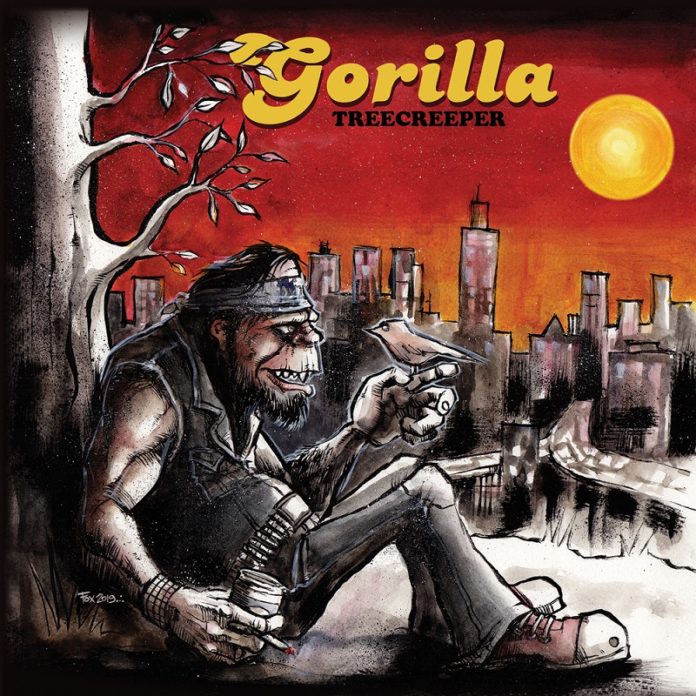 Heavy metal as we know it wouldn’t exist if it wasn’t for Black Sabbath; their influence was such, that an argument can even be made that some of their songs even influenced entires sub-genres of heavy metal. “Black Sabbath,” “Hand of Doom,” and “Electric Funeral” could all be considered pre-cursors to the doom metal sub-genre, while the tone and subject matter of stoner metal can most certainly trace its lineage back to “Sweet Leaf.” England’s Gorilla, formed in the late 90s, have kept that stoner tradition going over the last two decades, continuing to pay homage to Black Sabbath, and all things hard and heavy.

Treecreeper, Gorilla’s latest release, absolutely drips with heavy, psychedelic fuzz and thunderous volume. “Scum of the Earth” kicks right in, with a loud riff that threatens to go out of tune and off the rails, as the bass and guitar each climb up the necks of their fretboards, before locking into a heavy groove. Vocalist Johnny Gorilla has a gruff tone that falls somewhere between Lemmy Kilmister, Matt Pike (from Sleep and High On Fire), and Dixie Dave (from Weedeater). His vocals aren’t always the most tuneful, but the harsh warble isn’t always present, as can be heard on the bluesy title track. While there’s an emphasis on tight, heavy riffs, there are plenty of psychedelic moments, such as the opening guitar riff on “Cyclops,” which reminds me of “Planet Caravan” by Black Sabbath. When the band picks up the pace on tracks like “Gorilla Time Rock n Roll” and “Killer Gorilla,” though, there are hints of Kyuss, though with a healthy dose of blues rock mixed in.

Gorilla aren’t really breaking new ground here, but they’ve been around long enough to really do whatever the hell they want. There’s a lot of psychedelic rock, mixed with heavy blues (think Jimi Hendrix), filtered through a heavily fuzzed out guitar, pounding drums, thrumming bass-lines, and gruff vocals that add an extra layer of nastiness into the mix. If ONLY the production held up, this would have been a perfect stoner rock album. As it stands, though, this is a somewhat lo-fi record, with mostly guitar, vocals, and cymbals dominating most of the mix throughout. The drummer bashes on his cymbals relentlessly, which often causes a little distortion in the overall clarity. While there’s plenty of cymbal, the rest of the kit gets a bit buried in the mix, thanks to the volume of the guitar and vocals. Oh sure, you can hear snare pops, toms, and even occasionally the kickdrum, but it’s not anywhere near as thunderous as it could be. This almost sounds more like a really solid demo than an actual studio release at times, which, hell, maybe Gorilla were going for that raw sound anyway.

Production aside, Treecreeper is a pretty enjoyable stoner rock record; while it might not be an instant classic, not every record needs to be. Sometimes you just want a big loud record, and Gorilla have mostly delivered that. Fans of Kyuss, Black Sabbath, and even some High On Fire, will find a lot to like here, and while I would have liked just a little more variety and a cleaner production, I think this is a record worth checking out.

Gorilla - Treecreeper
Treecreeper isn't a perfect record, but it offers a lot of killer stoner metal riffs, which is all you really need sometimes.
Reader Rating0 Votes
Heavy, bluesy riffs
The quieter moments are really spacey, and good for zoning out to
Johnny Gorilla's gruff vocal match the tone of the music perfectly
Not much to differentiate this record from dozens of other stoner albums
The production is a bit too raw, with not enough low-end or drums in the mix
3.5