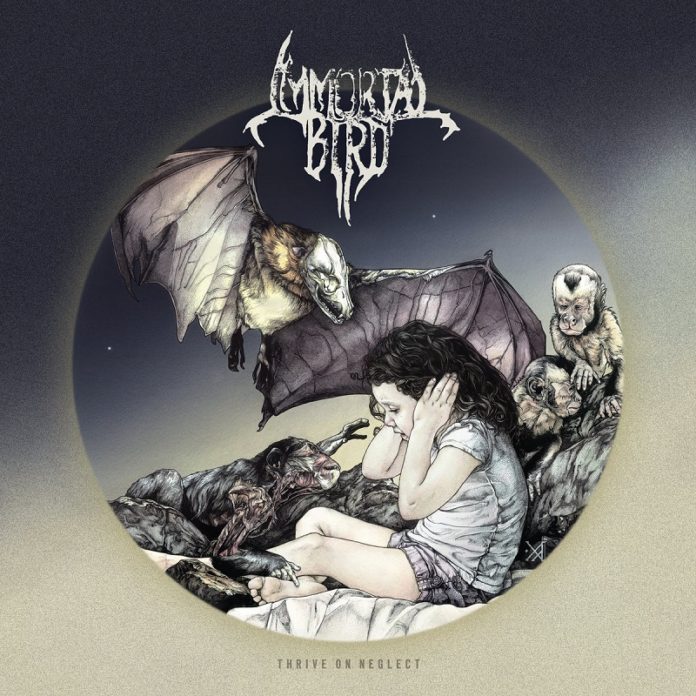 It’s been 4 years since Immortal Bird‘s last album. This new release, their debut on the 20 Buck Spin label, shows that the time spent crafting this follow-up has been very well-spent.

Playing death metal with a blackened edge and touches of various other styles, IB keep their songs impressively melodic in the face of sustained brutality. Much of the groove is built into the low end, so it avoids the common melodeath taint of cuteness leaking from sopranos and noodliness, and instead fires off one salvo after another of break-neck drumming, toothy guitar, and slamming bass-lines, all topped off by Rae Amitay‘s forceful vocals. While there’s clearly a lot of thought and revisions put into the abrupt time-changes and nose-dive breaks, the band does a great job of keeping it from seeming too deliberate. There’s a sense of anxious spontaneity throughout the music, with barely-contained vitriol threatening to burst the songs’ structures, fantastically merging the moody energy of the music with its form. IB also vary the lengths of the songs, from the 3:40 opener to the seven minutes and change of midpoint “Avolition” (which is a real fucking banger), giving themselves an avenue to show even more diversity of composition.

As twisty and madcap as the songs tend to be, they also have a persistent knack for pulling you into banging your head right along with the steadier beats. And even in the flights of contortionist counter-pointing and tortuous throw-downs, there’s a commitment to an underlying and purposeful (though often obscured) order to the superficially chaotic asterisms. That eagerness to push the abilities of themselves and the listeners in the service of stronger and more interesting songs is a credit to the band, and it’s also reflected in their choices of song titles, which I’m sure will get online dictionaries some extra traffic.

All around, it’s a superb album. My one fault with it, which I can only imagine would have been solved by tossing in a ~1-minute interlude somewhere, is that IB do kind of rattle on in one mood for the entire go. Admittedly, that’s a very small fault, and trying to leaven things would have most likely resulted in a weakening of the overall impact. But it’s quite telling that such a minor item is the only complaint I can raise, and if you have any taste for metal which challenges you on top of kicking ass, you need to get yourself a copy of this record.

The Bottom Line
A damn strong album with plenty to chew on, and an implicit challenge to bigger bands to step up their efforts
Reader Rating0 Votes
Strong song-writing
Excellent instrumental cross-support
Hard Grooves
Doesn't overstay its welcome
Melts face consistently
The few mood counter-points that do appear serve to highlight just how rare it is for the band to break out of their dominating attitude
4.5

Anthrax – For All Kings