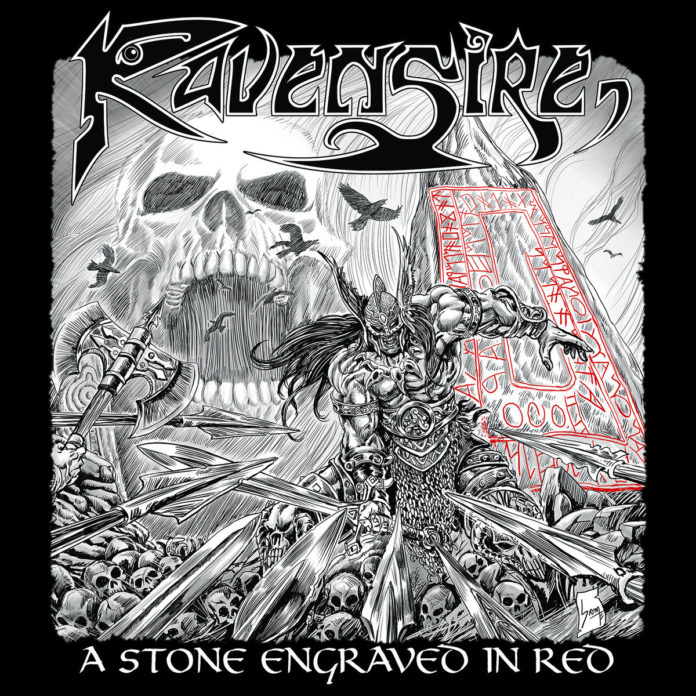 It’s interesting to think that “heavy metal” once described a very specific style of music, rather than simply being a blanket term for a wide variety of sounds. While the debate as to who was the first metal band is age-old, once the term began to be used to describe a style of music, there was no question as to which bands were considered heavy metal. Bands like Judas Priest, Iron Maiden, and Motorhead helped to solidify the blueprints for what heavy metal would become. Portugal’s Ravensire can trace their sonic lineage back to those very bands, creating a sound that brings you back to a time before the splintering and subdividing of the heavy metal genre.

A Stone Engraved in Red, Ravensire’s latest release, is heavy metal at its most stripped-down, simplest form. You really get a sense of what to expect on “Carnage at Karnag,” the opening track, with galloping riffs, soaring melodic guitar solos, and lyrics that pay homage to the sword-and-sorcery and battle themes of classic heavy metal. The lines between traditional and power metal are blurred throughout, and I’m often reminded of Manilla Road, who had a similarly epic sound in the course of their career. “Gabriel Lies Sleeping” alone could easily be a track off of Manilla Road’s Crystal Logic, though I would say this speaks more to the fact that Ravensire play such a classic-sounding form of metal that it blends in with the originators of the genre. If you take away the symphonic elements, much of power metal is indistinguishable from traditional metal, so it’s really just semantics when trying to describe what Ravensire are doing here.

“Bloodsoaked Fields” serves as a nice little acoustic interlude, building into the somewhat dirge-like “After The Battle” that could either be a power ballad, or a doom song, depending on who you ask. The mid-paced gallop in “After The Battle,” along with the flashy solos makes me think ballad, but I could certainly see how some would make the doom connection too. What keeps me from calling Ravensire a full on power metal band is that there isn’t quite enough speed metal mixed in; instead, most of the rhythms are more along the lines of Iron Maiden-esque gallops, though there are occasional tremolo-picked riffs, such as the opening riff on “The Smiting God.” However, even in that instance, the speed-picking and double bass only lasts for a few measures, before switching to a more mid-paced riff. By not just blazing through each riff, Ravensire’s sense of melody really gets to shine through. Vocalist Rick Thor has a gruff, but melodic tone similar to Lee Dorian’s vocals in Cathedral; not always the most tuneful, but they also give the music a slightly tougher edge.

The production is fairly sparse, with a minimal amount of overdubbed guitar tracks, keeping the tone clutter-free. Ravensire only have two guitarists, and by the Gods, that’s all your going to hear on tracks like “The Game of Titus.” Even still, the sound is full-enough to not sound too thin, though I would have preferred to maybe her a little more low-end in the mix. If there’s anything to complain about, it’s that Ravensire might be a little TOO beholden to the classic bands, and are almost indistinguishable from their heroes. Still, if you’re looking for a good, solid, uncomplicated heavy metal album that sounds like Manilla Road, or maybe even Cirith Ungol, A Stone Engraved in Red might be just the album you’re looking for