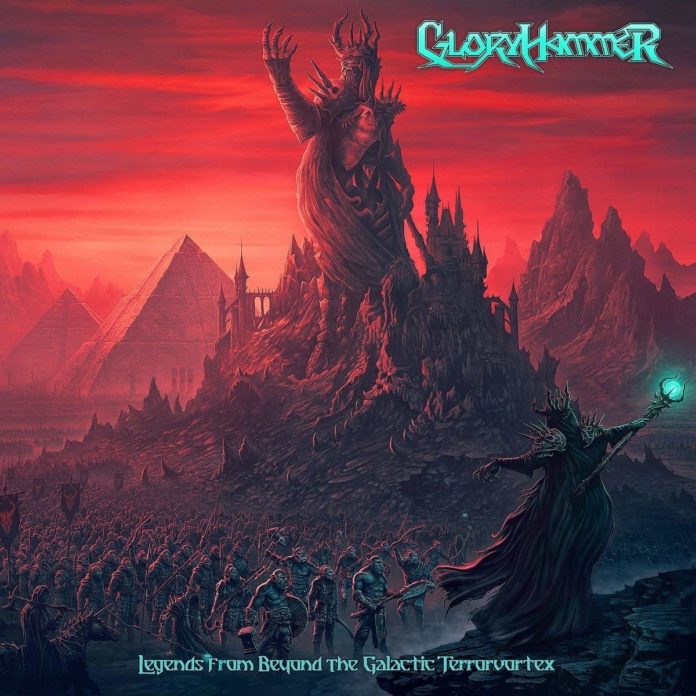 Let’s just get something out of the way: This is an amazing album, and you owe it to yourself to listen to it several times. This isn’t an exaggeration or just something thrown in for dramatic effect; I’m being absolutely honest. This is Symphony of Enchanted Lands for a new generation. A fast-paced storytelling album that stays true to everything that is good about power metal, and which masterfully blends with the fantasy genre.

As a side-project of Chri Bowes, the leader of Alestorm, it was always easy to look at Gloryhammer as more of an off-shoot of Alestorm than as a band in its own right. A band that was so cheesy in its presentation that many thought that it was supposed to be  power metal’s answer to Steel Panther. Even with the success of their first two albums, Gloryhammer still seemed like something that would always be second to Alestorm. Here they demonstrate that only are they a force to be reckoned with in their own right by releasing something of a level that, even in their best days, Alestorm have never been able to reach.

What’s really interesting about Terrorvortex is that it demonstrates the way in which Gloryhammer have adapted the sound of power metal to be more in line with modern-day geekiness. While they’re far from being the first ones to make their sound reminiscent of video games (Dragonforce have made an art out of it), I’d dare say that nobody had really managed to blend these styles in such a harmonious and seamless way. “Hootsforce”, in particular, sounds like something that evolved from the soundtrack of a fast-paced SNES game. Although this is something that Chris Bowes has also used with Alestorm, he has really pushed it to the maximum here, giving …Terrorvortex a sound that really conveys the feel of an epic adventure. The keyboards play an essential role in this, giving the music a larger-than-life feel, serving as a great complement to the rest of the band.

Considering how cheesy and over-the-top some of their songs seem to be (“Power of the Laser Dragon Fire,” and “Legendary Enchanted Jetpack” being prime examples of this), it’s hard to tell how seriously Gloryhammer want to be taken. The answer to that question, however, is irrelevant. The only thing that matters is that, with …Terrovortex, Gloryhammer have created an absolute masterpiece of power metal.

The Bottom Line
Gloryhammer have created a true masterpiece of the power metal genre.
Reader Rating1 Vote
An epic journey that grabs you doesn't let go
A videogame "feel" to the music that works great with the lyrics
5
Get the Album!
Amazon USAmazon UK