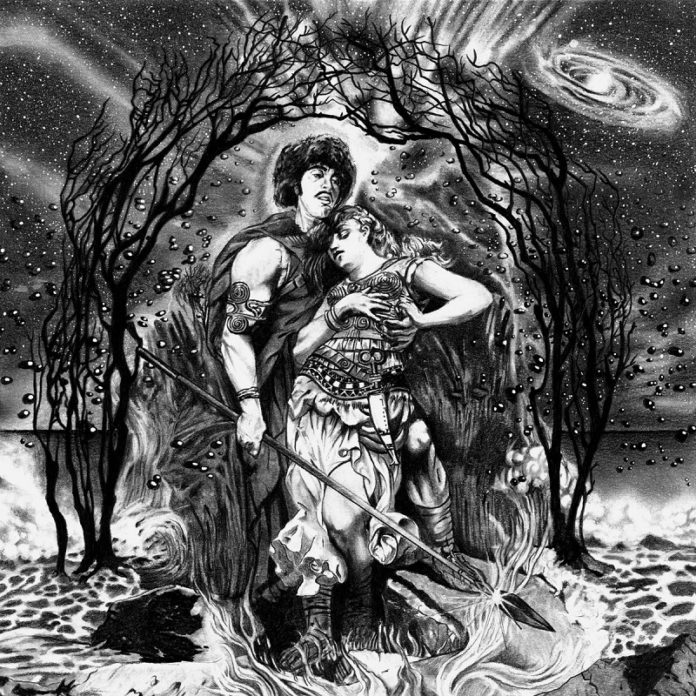 While Murk Rider have been publicly releasing demos since at least 2012, it’s only with Exile of Shadows that the mysterious Californian four-piece has put together a full LP. And, with eighty minutes divided between three songs, it’s one which should serve as a pretty thorough expression of their intent. While two of the songs appeared as live recording in the previous demos, the studio rendering shows considerable adjustment from those rawer takes.

“Descent” is the first of the songs, and it opens with some effective mood-setting. Crackling flames, creaking rope, keyboard drones, clean-picked acoustic strings, bird cries, and more are laid in one by one, forming an auditory picture of a cold forest night. As the song shifts into focusing on the musical side, things begin to take on a bit of early Agalloch flavor, even before the roughly rasping vocals burst into the mix. The escalation to thundering drums and bass reinforcement comes with sudden but organic-feeling force, and the numerous changes of the song’s structure (fairly necessary when you’re putting together a twenty-minute tune) strike a good balance between variety and cohesion. To an extent, it’s a potpourri of different black metal cultivars: there’s depression, along with furious rage, occult(ish) intensity, darkened speed metal remnants, and more. That the band weaves it all together into something so easy to follow from twist to twist is staggeringly impressive.

The transition to “Journey”, which boasts a near-half-hour run-time, plays to the sense of this being one vast trek by simply running the audio from the first track into it, with just a slight change-over bump as indicator. Here things take on a liquid ornamentation, with the sound of water flowing through caverns accompanied by background thunder, with a ringing chime providing a moment of meditation before the high-tempo ravages slam back into action. There’s some cool effect reached with the voices howling different verses over each other, and a bit more emphasis on riffs to dress the end of the stormy measures, but the divergence is kept internal (e.g., the break for clean vocals from guest Katrena Marie), instead of breaking this second movement off into a separate item from what was begun in the first.

The rise of a rushing waterfall guides listeners through the midway mark of “Journey”, and on top of it being a great point to take a food/drink/whatever break, what follows for the rest of the song comes at you with renewed ferocity and focus. Tighter and more groove-friendly riffs, the previously dissonant vocals coming together, and cleaner drum breaks keep things vibrantly active without dropping any of the credentials earned by the rough assaults preceding. The move into album closer “Return” (another half-hour track) comes with a relatively brief rainstorm atmosphere, before an extended noodly clean-guitar riff runs interestingly against the still-guttural singing. Some shimmery keyboard texturing carries on that vibe as the vocals fade out, giving things something of a redemptive mood without being too obvious about it. Gradually blending those three main elements (keyboards, noodly guitar, and vocals), the song finds more of a sustained stable ride than either of the others, something both relieving and off-putting by that point in the album.

Just as it feels like things may have wandered off course, a blistering resurgence of anger sweeps through, carrying along the clean-toned current and flowing into yet another new sort of terrain for the music. As the music rushes along, things get almost unhinged in energy and instrumentation, with a few deliberate breaks in the action highlighting perfectly well Murk Rider‘s control of everything. As they reach the final stretch, things get ratcheted up once again, hitting upon a series of invocational chants for its shape-changing and satisfying finale.

In terms of sheer evident effort, I have yet to hear an album this year that comes close to touching Exile of Shadows. Of course, all the technical prowess in the world can be a waste if the results aren’t listenable, but Murk Rider are fortunate enough to have that in spades as well. Unlike albums like the also 1-hour long Dopesmoker, this isn’t an album to throw on casually, especially thanks to the emotional expressiveness threaded throughout the assorted rampages and interludes. Nonetheless, it’s certainly an album that will leave a deep impression.

THE BOTTOM LINE
Holy shit, this is an album that actually lives up to being seven years in the making.
Reader Rating4 Votes
POSITIVES
Massive in scope, duration, and ambition, and manages to actually fulfill those high-aimed goals
Diverse in expression and arrangement
Successful in virtually every mood and dynamic it undertakes
Amazingly digestible for an eighty-minute album
NEGATIVES
Uh, it's pretty long.
5
Links and Stores
Bandcamp