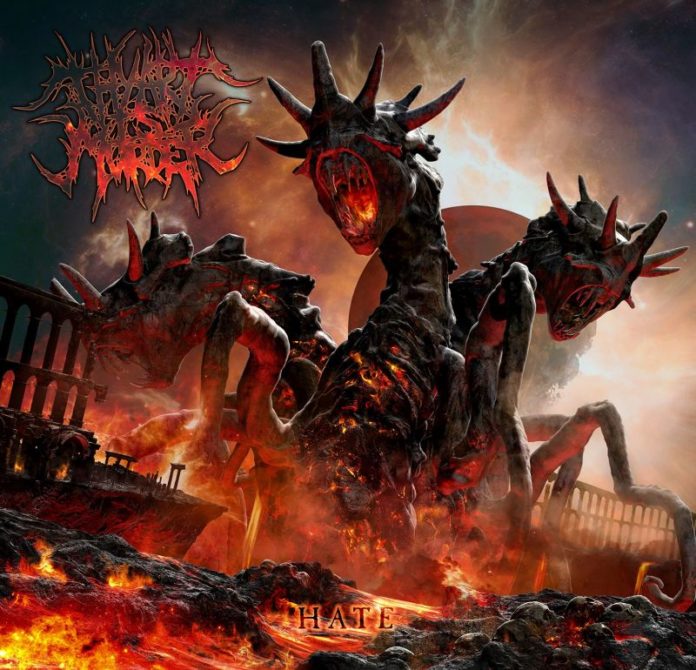 With this new release, Thy Art Is Murder seem to have grown quite fond of some Deathcore/Death Metal/Grindcore artists (as they should), showing that they do not mess about.

The opening track, ‘Reign of Darkness’, doesn’t pull any punches lulling the listener into a false sense of security, since its discordant opening and guttural build up might lead you to believe that the album lacks a bit of aggression. You’d be really, really wrong: The the track pulls off its gloves and punches you right in the fucking throat with some speedy blasting and chunky break downs. Then, just when you think it can’t get any better, it slaps you again with a diminished solo in the style of Jeff Loomis and drumming so god damn fast that it’s simply hard to believe. The brilliance of the drummer is one of the more positive and recurrent themes throughout the album, effortlessly blending between techy off-beat drumming, ridiculous fills and some of the fastest blasting you’ll ever hear. The vocals sound brilliant and are expertly delivered by Chris McMahon even if he could use a little bit of variance in his tone: gutturals are all well and good for a while, but my appetite for the high shrieks and pig squeals was left anything but sated.

The production is pretty much what you’d expect just from looking at the band logo, and you’ll have to decide for yourself whether you think this is a good thing or not. Chunky, mid-heavy guitars that are as tight as anything you’ll ever hear, slightly over-produced drums (a little too ‘clicky’ for my taste) but sitting brilliantly in a masterful mix, and vocals multi-tracked with a cubic fucktonne of gain. It’s impressive that such a complicated album has literally every instrument easily identifiable and not a single riff or fill or growl lost in translation.

My initial problem with this album, and it’s only a minor qualm, is the over abundance of breakdown riffs, seemingly becoming all too familiar with the newer death metal bands. To me it just seems to break up the tracks in an unnecessary way and make them lose a bit of the natural flow and aggression. Another detrimental aspect here is that the album just can’t quite keep it up and go the whole distance, especially considering how epic and brutal the first two tracks are, making me feel a bit bored by the time I reached the last one. It becomes a little bit to much of the same and even the excellent drumming and interesting guitar lead work weren’t able to save that. Perhaps they should have dropped the last couple of tracks and focused a little more on making the latter third(ish) of the album as attention grabbing as the start.

A relatively decent album with the odd moment of brilliance, this is a release that you should definitely check… Even if only for the first half.