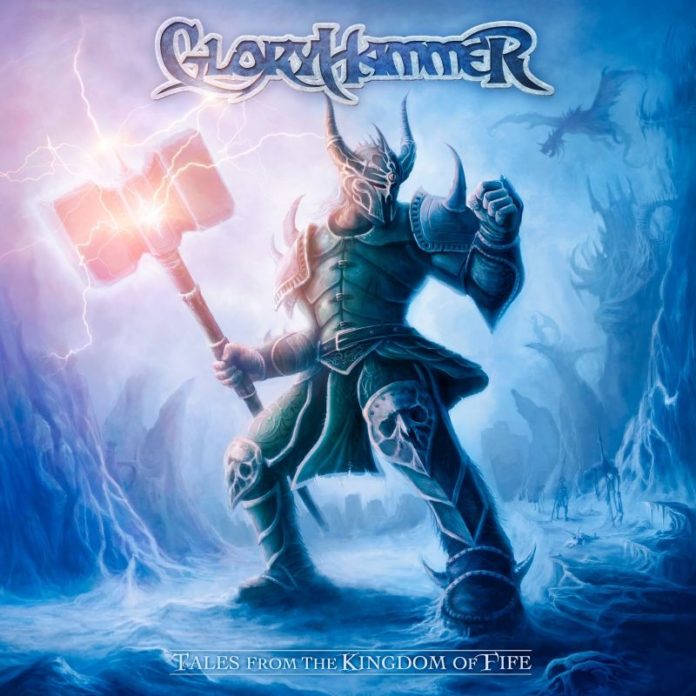 First and foremost, before I start the actual review, I must admit that I am really fond of parody bands of any genre, and generally, bands that don’t take themselves too seriously. Although, at least to my knowledge, Gloryhammer never declared themselves as a comic act per se; the image, the lyrics and basically everything about this band is too ridiculous to be taken seriously.

The UK based Power Metallers were founded by Alestorm vocalist/keyboardist Christopher Bowes, and are out to take us on a journey into an medieval alternate Scotland, filled with magic and mystery. The musical aspect of Tales from the Kingdom of Fife can be best described as a watered-down hybrid of Sabaton and Rhapsody (of Fire). One can distinctly hear the rough vocals and heavy, galloping rhythms of the former, and the renaissance-inspired melodies and virtuous guitars of the latter. This similarity is, in fact, the greatest flaw of this album. The entire release lacks originality, and is essentially a collection of late 90’s/early 2000’s Power Metal clichés: riffs played and lyrics sung times and times again. There’s still some variety present, like the Turisas inspired “Quest for the Hammer of Glory” and “ Hail to Crail” or the Dragonforce-like hurricane “Amulet of Justice;” however they do not redeem the fact that the rest is but an unimaginative and washed-out collection of cheesy tunes.

Should we, on the other hand, assume that this band is a parody act meant to mock the aforementioned clichés the overall performance still could have been much better, as a mock-metal act does not necessarily mean bad songwriting (check out Italian Nanowar of Steel for clues). And although songwriting is not without its flaws, the performance is impeccable. Vocalist Thomas Winkler demonstrates a variety of styles, from harsh and dirty vocals to high falsettos; main-man and keyboardist Christopher Bowes definitely has a knack for catchy keyboard tunes and guitarist Paul Templing possesses all the qualities a neo-classical guitar virtuoso should.

Although it features an amazing production and uncanny performance, Tales from the Kingdom of Fife is still missing a few things here and there, mostly in terms of songwriting. Should it have been released back in the 90’s it would have made an amazing Power Metal release. Should it have been released in the early 2000’s it would have been a fresh, inspired mockery. This way, being released in 2013, Tales of the Kingdom of Fife is a borderline superfluous record that might provoke a few laughs and would ultimately be remembered only by die-hard Gloryhammer/Alestorm fans.