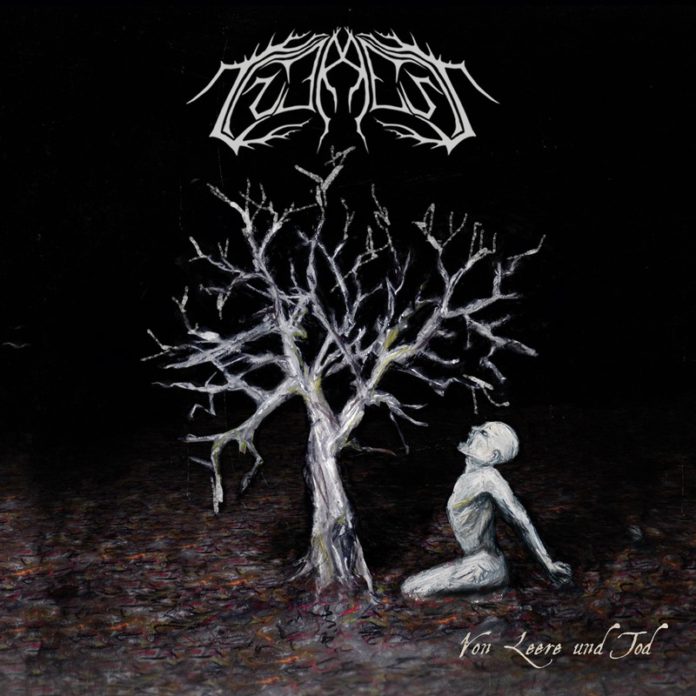 There’s something interesting about listening to music in a language that you don’t understand . Some people would argue that to fully understand a song you have to speak in the same tongue; that way you can catch the nuances in the lyrics. While this is true to a certain extent, I really believe that not knowing a lick of what the band is saying really forces you to concentrate on the song tenfold, you’re forced to listen to other things than you normally would; lyrics alone don’t create a song and with their absence (at least in the coherent sense) it’s a bit like being liberated; this creates a much more personal experience because it’s all about how the song effects you in the end. It’s a much more intimate experience.

Von Leere Und Tod is the latest entry from ÜberDeutsch black metallers Thormesis and it sure as hell it doesn’t disappoint; they provide enough grit and punch for the hardcore listeners, maintaining a good chunk of that cvlt sound while at the same time being adept enough to work in some catchy ass hooks.  Let’s face it, black metal isn’t exactly about making catchy hooks and great choruses, but it also doesn’t hurt it when they throw it in. What’s surprising about this album is that at times it has a very bombastic rock ‘n’ roll feel tagged along with the blast beats and growls. It’s a surprising blend that creates a fresh listening experience for a genre that tends to be so vehemently anti-change. Also, I’m sure they used the trusty ol’ Fender 15 watt Reverb amp; there’s just something about the sound that takes me back to my childhood. I digress.

The album starts with a bludgeoning attack with “Sterbend Herz” and continues on through to “Lebensgang”. They have a carefully crafted sound that, as mentioned before, borrows from several sub-genres and molds them into one attractive form. What’s great about this is that they don’t spend too long on the “atmosphere” of black metal nor too much on the solos of traditional metal, it’s a relationship that gives and takes when it so desires. While it may leave some thirsty and wanting from more of any of the given genres, this strong decision making stops Von Leere Und Tod from being a progressive mess. Surprisingly enough, there are lots of sing-along parts on the album and whether it was on purpose or not, the clean vocals sound a lot like Rammstein’s Till Lindemann.

There’s genuinely very little to complain about as most of the album has a very quick pace about it. Even the songs that track at 9+ minutes rarely feel as if they are being full of fat or repetitious. The only thing that I can find to complain about is lead singer, Krüger’s  habit of going “unh” before every break, solo or intro. After a while, it starts to sound like Grover choking on a potato. And, while it may simply be indicative of the genre, the audio quality is nothing to write home about; the guitars lack punch, the vocals at times lack definition, and sometimes it sounds like the bass drum has been swapped for a wet towel. However, fans of early black metal bands like Darkthrone will dig the thin and piercing guitar tone and any fan of the second wave of black metal acts will love the vocals. Thormesis has made several choices that some metal fans may not agree with, but in the end it’s about cutting your losses and adhering to your creative vision and from what I can tell from Von Leere Und Tod, they’ve made all the right ones.