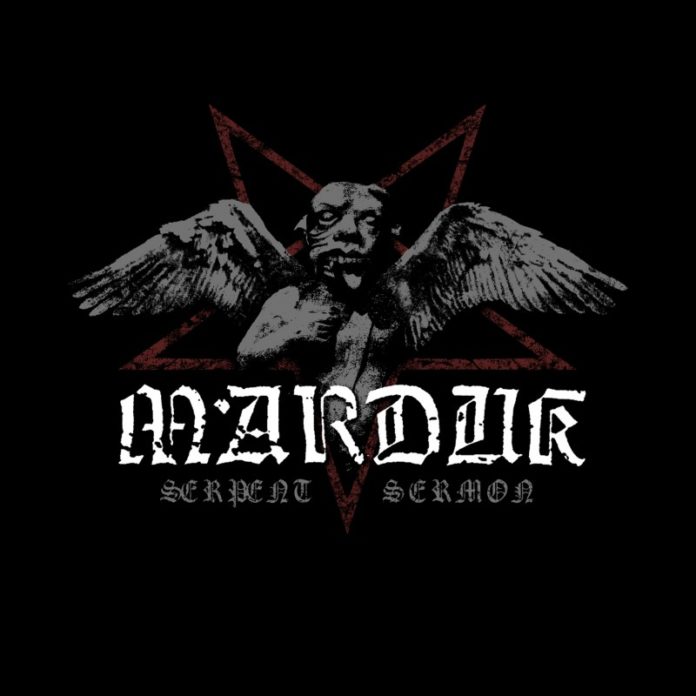 Hailed as being one of the premier groups when it comes to anti-Christian black metal, Marduk are back at the helm of their Panzerkampfwagen and ready to decimate all who lay in their path.  The band has gone through some variable sound changes throughout their 22 year career, but have always been able to keep a foothold in the barbarity of it all.  While I know that the last few Mortuus-era albums have been received with split impressions, I have always been a fan of Marduk throughout their illustrious career, and I was eagerly awaiting their brand new offering, “Serpent Sermon“.  A few weeks ago they decided to be giant cockteases and released a music video for ‘Souls For Belial’, and while it did take a few listens to grow on me, my anticipation was growing by the minute.

If there is one immediate difference I have seen in “Serpent Sermon” than from the bands other output, it is that this album isn’t as straight forward as one may think.  Marduk has created a sound that is much more atmospheric and progressive, mainly relying on Mortuus to draw in the listener… at least that’s what they want you to believe.  ‘Messianic Pestilence’ comes forth with a fury that only black metal can provide and grants the wish to those who crave a more traditional sound.  Even when moving onto ‘Souls For Belial’ for the 800th time I am very happy to see the variation that Marduk is incorporating into their music.

I already mentioned that some may be thrown off by the direction Marduk has taken with “Serpent Sermon“, but this is what makes it exciting, for you are not given just another black metal album.  Of course there are going to be the usual mainstays of black metal throughout the album, but the creative liberty the group has taken just works.  Mortuus does not just screech in a hail of cacophonous lyrics, but instead uses different shrill approaches while you are pummeled by the rest of the group.  For instance, ‘Into Second Death’, ‘Temple of Decay’, ‘M.A.M.M.O.N’, and ‘World of Blades’ take a turn towards more controlled and melodically “epic” territories, and Mortuus takes advantage of the atmosphere and gives a chilling performance, even if he does sound like Shagrath (Dimmu Borgir) at times.

Now, just because I am focusing a lot on elements that we might not have expected from Marduk does not mean you won’t get a healthy dose of blastbeats and razor sharp riffing.  ‘Messianic Pestilence’, ‘Damnation’s Gold’, ‘Hail Mary (Piss-soaked Genuflexion)’ and ‘Gospel of the Worm’ are crafted with nothing more than blazing hatred.  In fact, ‘Damnation’s Gold’ may be my favorite track on this album because not only does it do an excellent job of keeping with Marduk‘s older style, but they also do an amazing job putting in their newer ideas, too.  No matter which style one may prefer, there is going to be something that is tailored for everyone on “Serpent Sermon“.

When it comes to negatives on this album I am extremely hard-pressed to locate them.  I think Mortuus is turned pretty high in the mix throughout the album and sometimes it seems like he is drowning out everything else so he can get his diverse vocal style out there.  On the flip side I think the snare is too low in the mix, especially during the faster sections because it gets buried underneath everything else.  Normally I would label the bass as being a problem, but Devo’s bass lines are surprisingly audible and work very well within the rest of the band, particularly during ‘Damnation’s Gold’ and ‘World of Blades’.

When everything is said and done, Marduk took a chance with “Serpent Sermon” and I commend them on wanting to do something different.  Not only that, but everything on here is crafted and put together so well that I really had to nitpick in order to find faults with it.  The diverse approach that the band took in their writing was nothing short of spectacular and executed near flawlessly.  I believe this is Marduk‘s best work since “Panzer Division Marduk” and is definitely my favorite black metal release of 2012 thus far.