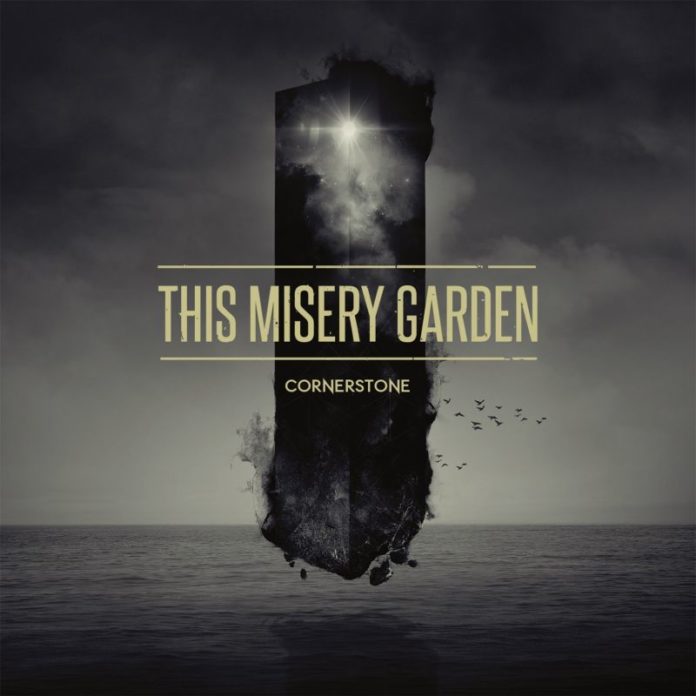 There are certain genres that I thought I’d never hear again, and nu metal is definitely atop that list. It’s not a bad thing, I must admit that I was a big fan back in the day. In fact, I still listen to the same albums that I did back when I was 13 years old. What can I say? I have great music taste. But there’s a certain twinge involved in This Misery Garden‘s latest release Cornerstone that goes well beyond anything offered up by the likes of  Disturbed, Spineshank, or Slaves on Dope. For one, TMG‘s approach to melodic attacks are something a lot more modern; think modern Swedish/Finnish hard rock/metal hybrid bands with a slower tempo. But at the same time, there’s something missing…something from the past. While Cornerstone does indeed sound fresh, I can’t help but think that it would have fit in well into 1994. Then about 3 songs in it hits me, part of the sound that’s been eluding me becomes suddenly clear; a hint of grunge is sprinkled upon the tracks. Reminiscent of the heavier stuff that Stone Temple Pilots put out like “Down” and “Sex Type Thing”, the sound transports you to the mid-late 90’s and all of a sudden 56k modems, Home Improvement, and that girl from Boy Meets World come flashing back.

But in a world of constantly evolving music, the question arises of how much of a solid choice it was combining all these has-been genres . Fortunately for TMG it works out pretty well. In fact, the band goes beyond just using the familiarity of those genres to be the sole attracting factor, throughout the entirety of Cornerstone they demonstrate stellar musicianship and probably some of the catchiest hooks that side of the ocean. Serious, pretty much every single song on the album has an incredibly catchy chorus or melodic interlude. From “Human E.T.” to “Rope” all the way to “Death Head Colours” there simply isn’t contesting the talent of TMG to write a tasty chorus riff.

TMG also aren’t a band that’s afraid to do what is required for the song. Often times they’ll slow down or completely change genre and tempo should they choose to in a song. Don’t get it wrong, TMG are by no means a progressive band, but that doesn’t mean that there aren’t a few surprises by these talented musicians peppered throughout the album.

Unfortunately,as catchy as they are,  you can’t form an entire album based on chorus parts alone.  The downfall of the album is the material in between. It seems that almost every song has a part that goes from inspired, to filler material in 6.5 seconds; the chorus will be inspired,  melodic pieces of art and then it seems as if the lead singer had forgotten his own lyrics. Rather than read it off the paper it seems, he was more than content to fake it by mumbling through the rest of the verse. Even still on the umpteenth spin, I have no idea what he is saying in some of the verses. It’s really a shame since there are so many great parts to this album that TMG would drop the ball so easily. Had they held on with the same passion and fervour that was in those aformentioned choruses, we would have a different situation here.

But it does not go without saying that there is something huge within TMG that is waiting to explode; you see, while this album definitely has some missteps in it, something really does shine through and declare that there is talent, waiting to be honed and exploited. This Misery Garden may not have hit the note on this one, but there is not doubt in my mind that with a little more care and finesse, there could be something more.