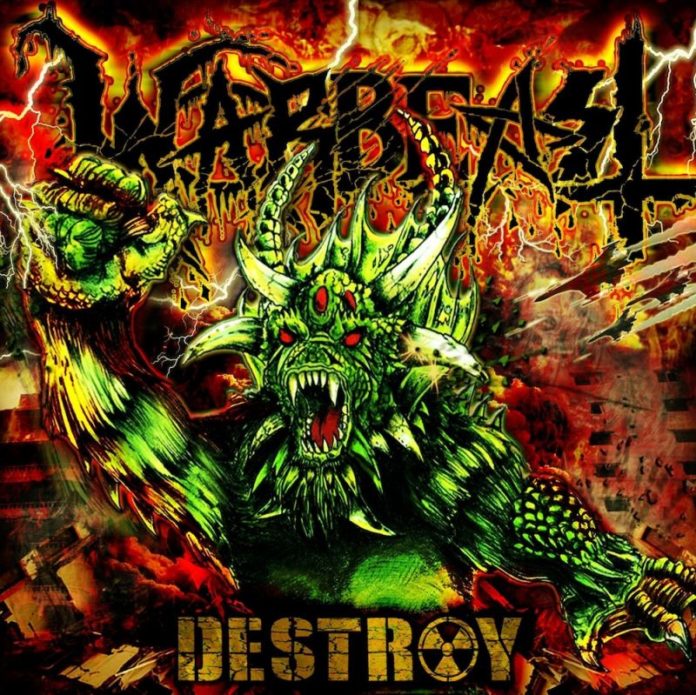 There’s certain things in life that you can get right, while getting others so blindly wrong. Take early black metal for one; great songs, but the production on them was absolute rubbish. Then again, you were dealing with a bunch of Norwegian teenagers that had barely any clue as how to play their own instruments, let alone multi-track recorders. It’s in the same sense that Warbeast gets so much right, yet misses the mark almost entirely on some things.  The songs themselves aren’t the problem, in fact there are some real face-ripping moments in Destroy, but if it’s not the song quality then what?

It’s not something that lets on when you first give Destroy spin, in fact, it took me a while to notice what exactly what was bothering me. The  intro track “Cryogenic Thawout” won’t lead on though; it does little more than misrepresent the rest of the album; I only wish that all of Destroy had the care and dedication to songwriting that the first track had, but it isn’t so. While most of the album is a relentless barrage-riff thrash style assault, the opening track has a late 80’s, early  90’s feel, with a bouncing bass and harmony guitar leads, it sounds a bit like Exodus mixed with Suicidal Tendencies, but when the actual album starts it’s almost as if Sodom had a three way with Exumer and Destruction. Is that a bad thing? Not in my books, the change in style though, is a little jarring. The guitar work is simply phenomenal on several tracks, functioning like a tight clothesline from a duet similar to the Amott brothers, full of dual solos and great dual guitar leads. There are times during Destroy that are simply unforgettable, but what bothers me is that there seems to be a real hidden and under appreciated talent for writing catchy intro riffs; the monster riffs from “Nobody” “Egotistical Bastard” (Killing is My Business… anyone?) are especially killer. But, these only really last for a quick 25 seconds and then the barrage hits you again. Warbeast themselves are right in saying in their self titled song that Warbeast is “monstrosity”, they’re not lying. The beat barely slows down below 200bpm during the entire 45 minute assault; and though most of it is good, there is little to no dynamic range in the songs, leaving your ears very very tired at the end of the song. Frankly, my ears haven’t felt this assaulted since the last time Strapping Young Lad made an album.

But, while there are plenty takeaways for Destroy, but there are also somethings that I just can’t slide by. The production by all accounts is a clean and bright sounding, but the way it is mixed together is just a disaster. At some points it just needs some tender care, while in others it needs a full out remixing. There is no finesse in it whatsoever, often times it just seems like all the nobs are pushed to 11 for the hell of it; it’s a confusing mess with the guitars and drums being jacked as far as they go. Does it lend to Warbeast‘s tough as hell, stronger than all style thrash? Possibly, but when the Schwarzennegger size bass kicks and blast beats punch a hole in the wall, I can’t help but think that it’s slightly excessive. It almost seems like the songs at times were secondary to just how friggin loud an abrasive Warbeast sounded.

But, I could be wrong, this may be the entire point. While other bands were riding into town on tanks and armored vehicles, Warbeast was more than content to be riding a 10 megaton warhead all the way down. And though I would prefer a remix of the album, I don’t know if finesse and methodical execution were exactly things that Warbeast had in mind while recording Destroy. Regardless though, the album simply becomes harder and harder to listen to, till you feel like you’ve done a full blown work out by the time “Nameless” hits the last note.