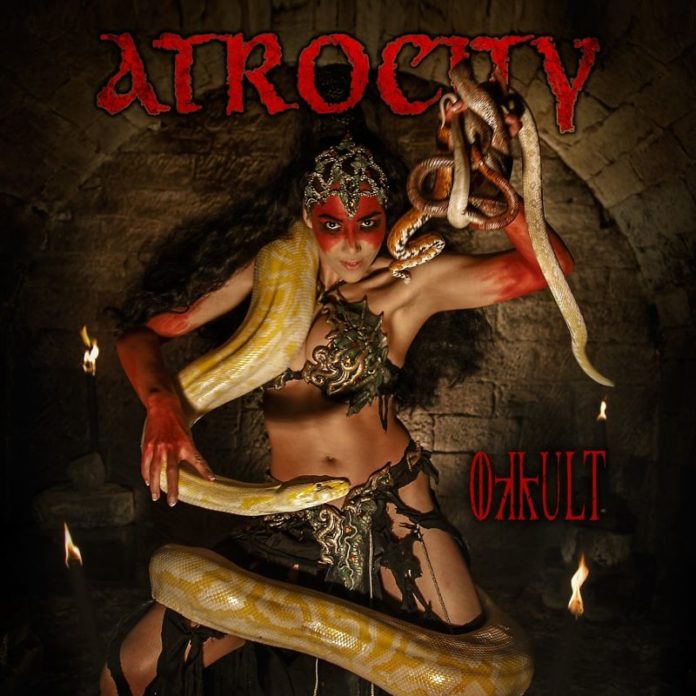 Atrocity is a Death Metal band hailing from Ludwigsburg, Germany. Although formed in 1985 as Instigators, the band never seems to have had much media attention. With Okkult the band is set to introduce a trilogy of occult-inspired records, which may prove to be the long-deserved mainstream breakthrough the band indeed deserves.

The opening track, “Pandaemonium,” gives you a pretty good taste of the entire album. It presents the band’s sound in the best possible way: a mixture of old-school Death Metal and epic, symphonic elements.  The album often relies on this combination, a blend of old-school, melodic and symphonic Death Metal, building a solid bridge between the two. There are also tracks that are a clear nod to the late 80’s Death Metal sound with little or no symphonic elements, such as the bombastic “Death by Metal.” On the other hand, tracks like “March of the Undying” represent the exact opposite: a symphonic, passionate and powerful pieces reminiscent of bands like Behemoth or Septic Flesh. The thing that all the tracks have in common is that they are catchy as hell (right after the first time I listened to “Haunted by Demons” I kept singing it for the rest of the day).

The band shines on their respective instruments, the 80’s traditional Heavy Metal guitar harmonies especially worth mentioning. The vocals are impressive, sung in a lower register most of the time, and very well produced, so that they may be enjoyed both by Death Metal fans and those who prefer other, lighter, metal genres. The symphonic part is also impeccable, courtesy of the Belorussian Lingua Mortis Orchestra, well known for their collaboration with Rage. The choirs are grandiose and the strings really contribute to the atmosphere on the record. All the elements are coupled with an amazing production, and unlike many metal bands that choose live orchestration, neither aspect seems predominant, instead working together in perfect harmony.

Okkult is a diverse album that may appeal to fans of almost any metal genre. It is almost like two worlds colliding, resulting in a product that features the best of both worlds; the edge of old-school technical death and the emotion and power of symphonic metal, laced with a bit of Gothic, heavy and progressive metal to spice things up even further.