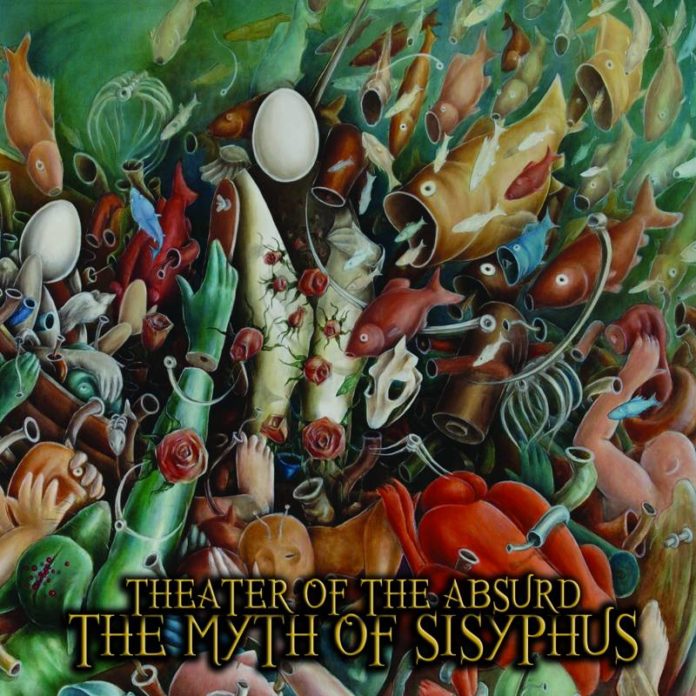 New York City’s Theater Of The Absurd are a relatively new band, having formed just in 2006, and often billed as “extreme progressive metal”. Now, when I hear the term “extreme progressive metal”, my first thought would be something along the lines of Opeth or Cynic, but that’s not the case here. At every nook and cranny you hear shades of King Crimson, Yes and arguably the most famous progressive band of all, Rush. While Theater of the Absurd make it no secret that they love the classics, they’ve definitely updated the sound to a heavier metal setting.

The Myth Of Sisyphus, is a very theatrical sounding record, perhaps even similar to a rock opera, though maybe not as formulaic. The album is full of twists and turns from beginning to end, changing time signatures, multiple vocal stylings (including choral vocals), and just emanating an epic overall feel. The metal edge in the music is akin to that of speed or power metal, though with some harsh vocals of the high-pitched black metal variety scattered throughout. It is in this mixture of styles and sounds that Theater Of The Absurd are able to do what a lot of bands in this style fall short of accomplishing, that is putting together multiple ideas and riffs in a cohesive manner,  a truly rare gift among musicians.

The music and  the vocals in The Myth of Sisyphus, a concept album based around the story of the same name, work perfectly in drawing you into the story, with the changes in the movement of the music adding to the drama. I strongly encourage you to pay attention to the lyrics, as these fellows have been able to really tell the story in a great manner. The album artwork is also a thing of beauty, reminiscent of early Cathedral covers, with a very surreal feel that absolutely matches the music contained within.

Of course, not everything is perfect in this release, and some issues do arise. For starters, it seems off that the band is consistently considered as part of the extreme metal movement since, as much as it might pain me to say it, Theater of the Absurd just aren’t that heavy.  As I mentioned earlier, Opeth seem to be the measuring stick by which most extreme metal progressive bands are judged, and these guys just don’t quite have the crushing riffs that you associate with the Swedes. The harsh vocals, the most extreme part of the whole affair, don’t mesh very well with the music, appearing almost as if they had been included just so they could be embraced by the “heavier” metal fans;  and while the clean male vocals are done extremely well, the female ones, of the soprano variety, may be very off-putting, and sometimes downright irritating, if you’re not expecting them (and since they’re not exactly a trademark of the genre, you probably won’t).

While The Myth of Sisyphus is a very dramatic sounding album, and the theatrics might be a bit heavy-handed for the casual listeners, if you like to immerse yourself into your listening sessions, this is really as good as it gets.