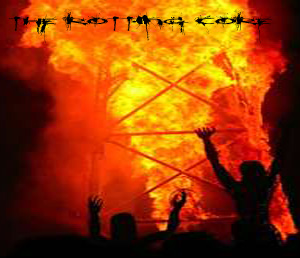 I’m sure a lot of us enjoy going to live shows.  Not only do you get to see some of your favorite bands, but you also get to interact with a lot of different people who share the same enthusiasm as you do.  I was waiting for the venue to open up when Behemoth came to town in April and I got chatting with a few guys in line, Sean Jeffers (vocals) and Travis Blosser (guitars).  Both of them were really cool and happened to tell me that they were in a band called The Rotting Core and had an EP coming out soon and wanted me to review it.  Being the nice guy that I am, I happily obliged them.

When you get into the meat of The Rotting Core they seem rather accessible on the outside.  The compositions has an aggressive-yet-simplistic groove metal sound with a tinge of metalcore and death metal thrown in for good measure.  It is definitely given that sound by Sean doing his best Randy Blythe (Lamb Of God) impression if Randy wasn’t as insufferable like he normally is.  Now, all of this is good and well, but the first two songs ‘Bane of Bloodax’ and ‘Feast’ come out limping.  In some ways I think that can be blamed on the production, but this is their first recording so I will let that slide.  However, the last two songs, ‘Lament of Desecration’ and ‘Primordial Aggression’ are able to bring the energy level back to normal levels.  While there may not be that much to get really excited about here, you can tell that the band is trying to find their “signature” sound, and that has to account for something.

I mentioned that the music is a little simplistic at times, and while that isn’t necessarily a bad thing on its own (just ask Last Days Of Humanity), what was there just wasn’t able to grab my attention and keep it for long periods of time.  One of the other glaring problems I saw was near the beginning of ‘Bane of Bloodax’.  Sean is in the middle of a lyric that he shrieks, but he is then cut off by a sound clip that sucked all of the energy that was building up.  This next one is just a matter of circumstance rather than a wanted and calculated decision by the band, but they were forced to use the stock drum samples in Fruity Loops because they were unable to get the drums recorded.  Because of this the kick drums can be a little over-powering.

Like with most early material in a bands legacy, there are bound to be points where they stumble.  Half of “The Rotting Core” was enjoyable while the other half lingered like an ex-girlfriend.  There just wasn’t that much to set themselves a part from being one of those generic heavy metal bands you’ll find writing a soundtrack to a BMX video game.  The Rotting Core still have a long way to go in putting out something that will be long lasting, but the talent is definitely there.