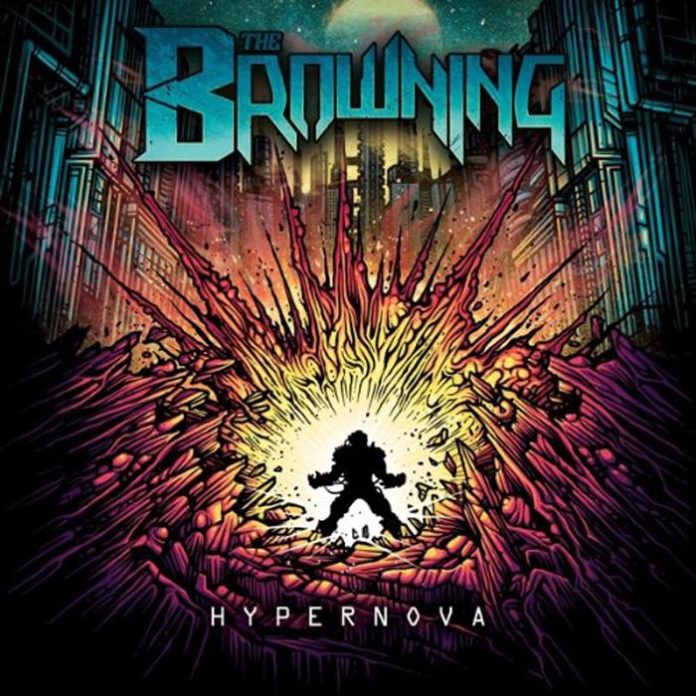 The Browning is one of those bands that were created to fill a non-existent gap in our musical landscape. What was attempted here, the mixing of electronic music with metal, is something that has been done a lot before. One of my favorite bands, Turmion Katilot, have been mixing electronic music with growling vocals for quite a while now, achieving a respectable level of success in the process; even before them, although with a less festive selection of electronic music, industrial bands like KMFDM and Ministry have produced some great crossover tracks throughout their decades-long careers. The Browning decided to grab all of that experience and just flush it down the toilet.

As soon as you start listening, you’ll come face to face with some of the most generic, ecstasy induced electronic beats that you’ve ever listened to. What in any other environment would have been dismissed as the product of a syphilitic mind, here takes the shape of 12 excruciating tracks that, for some reason, Earache and Century Media considered apt to be released to the public. Demonstrating that The Browning know their demographic, that of masochists and Guantanamo Bay inmates, they decided to crown this shit sundae with a Dubstep remix of their single “Gravedigger”, just in case you are a glutton for punishment.

Hypernova contains basically two elements, the electronic and the metal. Being somewhat of a fan of electronic music, I didn’t find the synth elements to be particularly interesting, although they were far from bad; I mean, electronic music is not really known for its complexity (although some exceptions exist) and I’m sure that these beats would be welcomed at the dancefloor of your local Ecstasy dealership. The opposite can be said of the metal section, which at times really represents an insult to your senses, as if the label had decided to shove a buttplug in your urethra.

While heavy sections in tracks like “Slaves”,“Industry” and “Fearpelx” show that The Browning have the potential of actually being heavy and decent (even with some extreme metal potential) Johnny McBee‘s singing wastes no time in taking a massive shit all over it by emitting sounds reminiscent of an injured dog or of what you’d imagine Nicki Minaj‘s “Roman” voice would sound like if she decided to growl. Let me assure you that this is not hyperbole, as those are literally the first things that came to my mind when I heard him singing.

If you want to get a feeling of the album, just go ahead and listen to “Gravedigger”, their first single, as it represents a good example of what The Browning seem to be all about: The generic electronic beats and their subsequent destruction by a singer that should have stuck to programming.

It is hard for me to imagine that there was once a scene kid just blasting some shitty electronic music in his parent’s basement thinking “This could really use some screamo“, but there you have it.

Even though the second half of the album contains some tracks that are more akin to classic industrial music and not so much to this made-up electronicore, the fact of the matter is that the bad outnumbers the good. When it’s good it’s barely decent, when it’s bad it’s just terrible; the bad growling, generic beats and repetitive melodies are too damaging for the overall experience.

I can find no reason why you should waste your hard-earned money on this… although if you’re a fan it’s probably not your fucking money anyway, so knock yourself out (I wanted to end the review by linking you to a couple of bands that are actually much, much worse than The Browning, but since that might give them ad money on Youtube, I won’t)

Torn The Fuck Apart – …The Dissection Of Christ