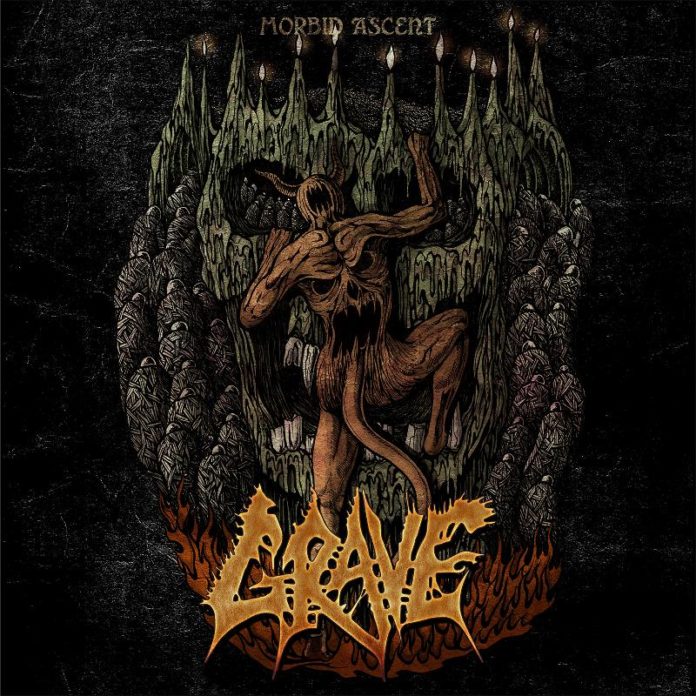 [dropcap]I[/dropcap] have always found it rather foolish to discount anything that Grave has done throughout their illustrious career.  After releasing one Swedish death metal masterpiece after another, they are back with “Morbid Ascent“, a simple five song EP.  After coming off the heels of their last release just over a year ago, “Endless Procession Of Souls“, it’s hard for me to imagine that the long-running titans have added anything new to their well-crafted death metal formula, so I expect “Morbid Ascent” to hit me in all the right places.

The dulcet tones of Grave‘s Boss HM-2 pedals reverberate against the pained howling of Ola Lindgren, and we are off with ‘Venial Sin’, which is the best track on this EP, and followed after that is the title track ‘Morbid Ascent’.  These are the only two new tracks from the band and are both very good, but then again Grave has been one of the most consistent bands in all of death metal, so this is no big surprise to me.

You are also treated to their take on Satyricon‘s song ‘Possessed’, which comes from their “Volcano” album, as well as a slightly retooled version of ‘Epos’, the final track on the bands last album, and a re-recording of their classic track ‘Reality Of Life’, which was originally taken from their 1989 demo “Sexual Mutilation“.  Grave‘s vision of ‘Possessed’ fits with their overall sound perfectly, and if I didn’t know any better then I would have never guessed that it was a cover song.  The inclusion of ‘Reality Of Life’ was an excellent idea since that is a relic that was only available through the original demo and when it was included on the bonus disc from “Back From The Grave“, and it was the demo version, so it was really nice to hear this song done in the same way the band has modernized their sound.  While I like the ‘Epos’ remix, I think it seemed a bit unnecessary to include on this EP, making it the lone blemish on this otherwise groovy death metal record.

Honestly, since this is only a five song EP, and only three were ones that grabbed me by my ragged shirt collar, you may want to only pick up “Morbid Ascent” if you’re an avid collector of all things Grave.  Don’t get me wrong, I think it’s worth purchasing for ‘Venial Sin’, ‘Morbid Ascent’, and ‘Reality Of Life’ alone, but I’m not entirely sure that everyone who would purchase it would feel they got their monies worth.  This one may be a bit of a gamble for some of you fans out there, but I think you’ll find enough here to keep your buyers remorse at bay.