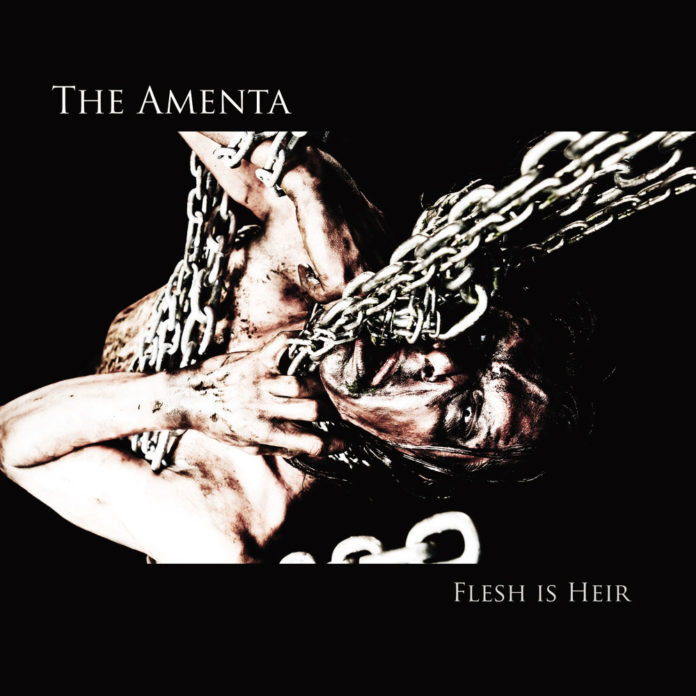 Writing this review during a scorching summer heatwave is something of a challenge. ‘Flesh is Heir’, Australian extreme metal outfit The Amenta’s first album in five years, is probably not the most appropriate soundtrack to getting drunk around the barbeque. Instead, this is a cinematic representation of cataclysm and apocalypse, and almost certainly the most brutal album I have experienced in the last year.

The Amenta personally reject the concepts of black and death metal, and hate the term ‘industrial’. That said, ‘Flesh is Heir’ lies somewhere in the space between all three genres, as demonstrated by one of the more accessible tracks, ‘Ego Ergo Sum’, combining an explosive groove-based riffs with industrial mechanical ambience.

Underlying all of ‘Flesh is Heir’ is a grimy sense of statics and electronics, less immediately obvious than the synth-work in other forms of death metal. On the whole, the industrial-esque ambience on the record works to The Amenta’s advantage, simultaneously providing respite against the sonic assault whilst also retaining that apocalyptic mood. This can be seen in the way that the album is structured around the atmospheric instrumentals ‘A Womb Tone’ and ‘A Palimpeset’, separating the main body of the album from the opening trilogy of songs and the climactic ‘Tabula Rasa’.

In spite of these moments of atmosphere, The Amenta’s commitment to extreme volume and brutality means that ‘Flesh is Heir’ is a difficult and demanding record. Make no mistake, it is one of that breed of albums which demands your notice, grabbing you by the balls and refusing to let go, an all-or-nothing attitude which treads the fine line between relentlessness or mere monotony. Unfortunately however, too often this line is crossed.

For me, the two stand-out moments are ‘Cell’ and the powerful chorus of ‘Obliterate’s Prayer’ – ‘Cell’ in particular oscillates between uneasy ambience and full-on gutsy ‘obliteration’, but this is a relatively rare moment of dynamic difference. Lyrically, the album deals with the ‘constant war between the faction that desires obliteration and the faction that struggles in the mud’ and the strongest moments are those which wear this two-sided attitude openly. However, these moments are all too scarce, and too often the album is lost in the mire of its own volume and extremity.

That said, if you are prepared to wade through and unpick the sonic assault on offer this could be an album for you. ‘Flesh is Heir’ is not without its moments and this review would be incomplete without an acknowledgement of the technical prowess on show. The drumming is especially impressive, and the supersonic double-bass kicks really push the album forward, especially on the opening ‘Flesh is Heir’ and the close of ‘Teeth’.

Too often in metal is nihilism an easy ride to a band’s image. To their credit, The Amenta’s ‘Flesh is Heir’ never once feels insincere or cheap in its apocalyptic sound, but the insistence on such a sound is a little wearing. If you want pure ferocity and extremity then this album is solid enough. Personally, however, a brutal sound is always made more brutal through contrast, of which ‘Flesh is Heir’ is too lacking. There is potential here though – I just hope we don’t have to wait another five years for The Amenta‘s next full release!