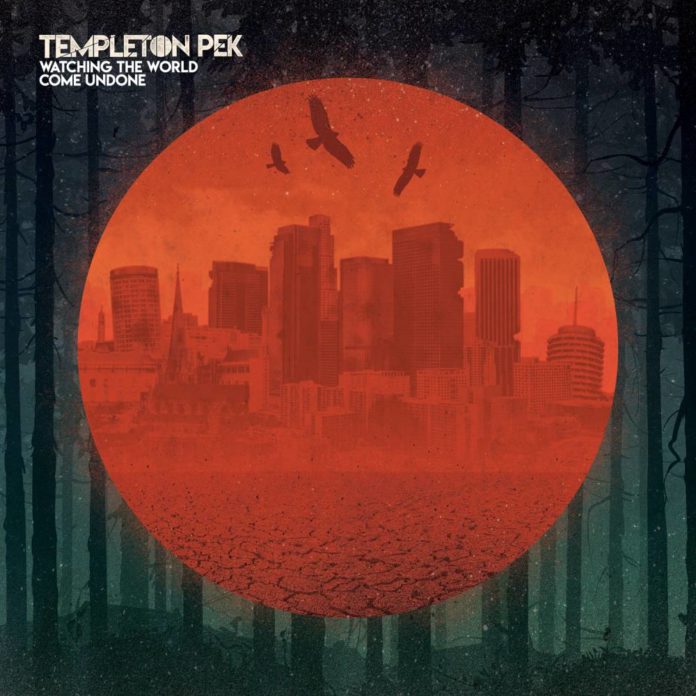 Punk rock has been an influence on pop culture (and, to an extent, heavy metal) for many years. Dave Mustaine (of Megadeth fame, if you’ve just now discovered metal) has often been vocal about his punk rock roots, while bands like Rancid and The Offspring were featured on MTV in the 90s. Along with its sonic and aesthetic influences, punk has also served as a vehicle for political messages, similar to the way Woody Guthrie used folk music to spread social awareness. Dead Kennedys, for instance, wrote searing lyrics that both lampooned and criticized the conservative politics of their era, while Crass started an actual anarchist movement. The UK’s Templeton Pek hope to continue this tradition with their latest release, Watching The World Come Undone.

The first thing you’ll notice about Watching The World Come Undone is how polished the sound is, and how tight the musicianship is. Templeton Pek aren’t playing super complicated material, but there’s a lot more going on than what you’d hear on an average Ramones track. “City Of Fire,” for instance, has plenty of overdubbed guitars, with chiming distortion accompanying the typical “buzzsaw” chord progressions, while the vocals have a poppy, sing-along quality similar to those heard on much of the late 90s and early 00s Southern Californian punk records. I’m reminded of Rise Against, who have a similarly pop-minded approach to melodic hardcore (or pop punk, if you’re especially cynical). The vocals are melodic, with just a little bit of grit, reminding me once again of Rise Against, or even a little bit of Dexter Holland of The Offspring. Really, describing the vocals is just like describing the music itself: there are lots of pop-sensibilities mixed in, with just enough edge in there to keep things from coming off as overly “safe” and homogenized.

As catchy as the tunes on Watching The World Come Undone are, Templeton Pek don’t really do much to differentiate themselves from the rest of the bands that have played this same form of punk rock in the 00s. The songwriting is punk-by-the-numbers, with clear influences from The Offspring and Rise Against, while the politically-charged lyrics are non-specific enough to not offend anyone, or pose a real threat to the establishment (whoever/whatever that may be). While wishing for a better world is a noble thought, there are no solid answers laid out in the lyrics, which causes them to lose most of their impact. This is a highly polished record, with excellent production, and the songcraft is pretty adequate, maybe even a cut above the scrappy, slap-dash quality of early punk records, but it’s ultimately a forgettable album. If you’re waiting on a new album from the aforementioned punk artists, this will serve as a nice little stop-gap, but beyond some nice melodic passages (the instrumental section of “The Aftermath” is a particular high-point), there just isn’t much substance here. It’s by no means a bad record, it’s just not a great one either; it’s simply an okay punk rock album, making it fairly non-essential for hardcore fans of punk music.