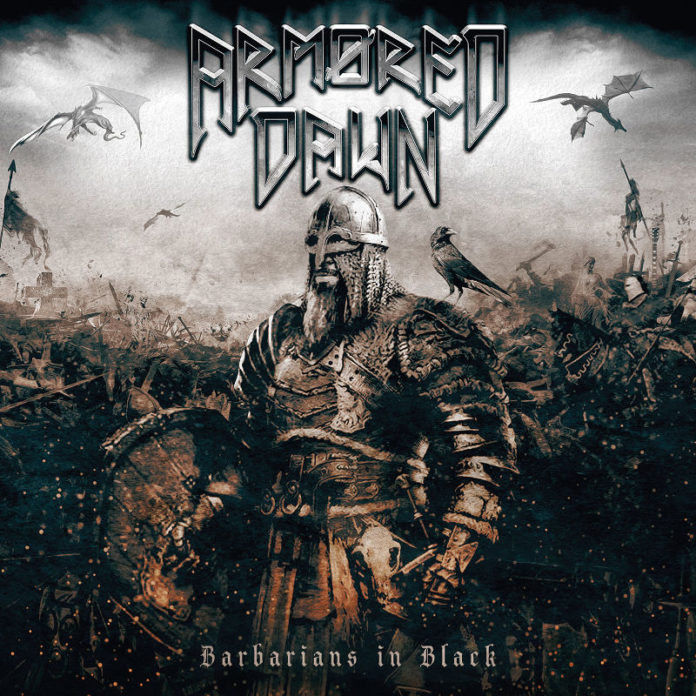 Following up on their 2016 debut LP, Power of Warrior, the Brazilian six-piece of Armored Dawn have made quick turn-around for their sophomore album, which embraces the fantasy flavors of traditional heavy metal without qualms. Titles such as “Beware of the Dragon” (the opening track), “Men of Odin”, and “Gods of Metal” give big clues as to how the band leaps into the swords-and-glory aesthetic championed by groups such as Rhapsody of Fire (with whom they share mixing/mastering handler Seeb Levermann), though AD downplay the symphonic touches in favor of harder guitar and drum action, bringing a decidedly modern approach to the otherwise retro material without undercutting their influences.

Although there’s a splash of death metal brought to bear at times, in general the band seems to favor fun over aggression. As such, the songs can feel a little juvenile, even for the genre, though this seems to have been more of a conscious choice. Highlighting, for example, the grandeur of a marching army over the violence of actual battle, or painting struggle as sheerly abstract action (e.g., “Rise and Fight Again”), allows them to connect with that late-’70s D&D mind-set which held strong before Satanic panic and deconstructive narratives forced deeper and darker themes onto the fantasy realm. And really, there’s nothing wrong with that, if you’re looking for that exact sort of throw-back simplicity, which some certainly are. If what you want is an album with an eye to the future, though, there’s no ambiguity as to whether or not you should be looking elsewhere.

Setting in place, the band does seem to have a good time with their songs, from the strident lead guitar on through bold drumming, staunch rhythm support, and giddy vocals. Touches like the distant thunder atmospherics of “Eyes Behind the Crow” help give things a sense of larger scope and fuller realization, and the album as a whole has a nice flow from start to finish. As an emulation of metal from decades past, it does a pretty damn good job. Unfortunately, there doesn’t seem to be any ambition to be more than that, at least at this point. Perhaps future works will find the band stretching themselves into something with a bit of experimentation to it, but even if they stay basically a tribute band to the spirit of Manowar, they pull it off with enough flair to excuse the retreading.

THE BOTTOM LINE
Well-played and enthusiastically presented, but the band's choice of material makes it feel too locked into the past
Reader Rating0 Votes
POSITIVES
Good presentation and swagger
Punchy interplay
Clean mixing
Good album flow
NEGATIVES
Nothing fresh to say with their metal chops
4