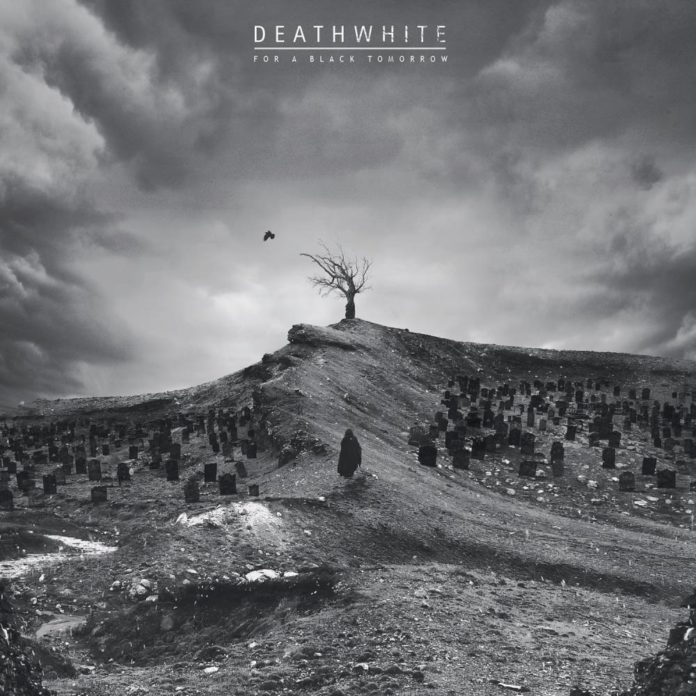 Describing an album as “heavy” seems to be a pretty trite, uninspired statement; then again, it also depends on what your definition of heavy is. Slayer’s Reign In Blood is considered one of the heaviest albums in metal history, but Raw Power by The Stooges, Suicide’s self-titled album, and Pornography by The Cure have all been described as heavy as well. When you take that into account, heavy can describe the mood a band creates just as much as it does the forcefulness of the music. With that in mind, the first word I thought of when I started listening to For A Black Tomorrow, the latest full-length from Pittsburgh, Pennsylvania’s mysterious Deathwhite, was “heavy.”

Deathwhite play a melodic, heavy form of gothic rock mixed with doom, in the vein of bands like Katatonia and Paradise Lost. The mood created on For A Black Tomorrow is oppressive, gloomy, and yes, heavy, all while managing to push the boundaries of the gothic/doom metal genre. Tracks like album opener “The Grace of The Dark” and “Eden” have a dream-like, shoegaze-influenced quality to the riffs that reminds me of UK doom outfit 40 Watt Sun. Rather than focusing on super low-tunings and orchestral keyboards, Deathwhite use minor chords and shimmering distortion on their riffs to create the morose vibe that permeates every nook and cranny of For A Black Tomorrow. The vocals are clean, with the most aggressive moments coming from the semi-yelled/sung lines midway through “Death and the Master,” and even those aren’t exactly harsh. “Prison of Thought” is a great track to look for if you want the album summed-up in one song; heartachingly beautiful acoustic guitar bits are interspersed with overdriven, crunchy guitars that manage to walk the line between heavy and melodic, with clean vocals that float above it all, becoming as much a part of the atmosphere as the rest of the instruments.

When comparing For A Black Tomorrow to other metal records, it’s easy to say that Deathwhite aren’t a heavy band in the traditional sense (even though there are some pretty crushing moments on tracks like “Contrition” and “Prison of Thought”). Though the bands Deathwhite are compared to have a slightly heavier edge (again, in the traditional sense of the word “heavy”), I would daresay this record is an important one for heavy metal in general. Sometimes the boundaries need to be pushed, the sound needs to be updated, and new things need to be tried, and you get all of that in For A Black Tomorrow. What I find fascinating about this album is that, while my idea of what constitutes a gothic/doom record is challenged, there isn’t an ounce of pretension detected in what is presented here. Deathwhite have simply crafted the record they wanted to make, and the fact that it isn’t easy to neatly categorize it is secondary to creating an honest representation of what the musicians want to portray in their band.

This is an album that will likely require a few listens to fully appreciate for most listeners, since it is undoubtedly a departure from the genre standards; the production, for example, is very guitar-centric, though, unlike many gothic/doom releases, the emphasis isn’t placed on the low end of the sound. The bass is present, but adds another layer of melody than it does a deep underbelly to the main riff, which tends to be the case with most bass-lines in this genre. The vocals are high in the mix, with occasional overdubs, but are treated as another instrument, rather than a focal point. If you go in with an open mind, For A Black Tomorrow is a richly rewarding experience, and has the potential to put Deathwhite in the upper echelon of the gothic/doom metal scene.

Deathwhite - For A Black Tomorrow
Boundary pushing, melancholy masterpiece from up-and-coming American outfit Deathwhite
Reader Rating2 Votes
Great mixture of tones that mix heavy riffs with melody
Excellent songwriting and performance from each musician
Could use just a little bit more low-end in the mix
Might not be heavy enough for some fans of traditional doom and gothic metal
4.8