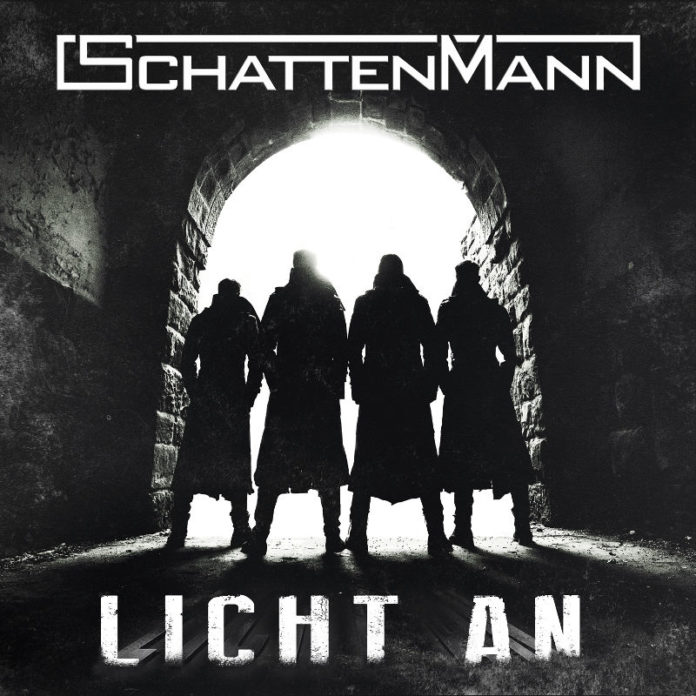 Coming off the heels of an EP and a string of singles released last year, the first full album by Schattenmann shows the German (could you guess?) group’s talents when put to the long haul. That those talents are mainly directed towards emulation of Rammstein‘s template isn’t damning in and of itself, as that particular strain of industrial metal is rarely even attempted outside of Germany, so there’s hardly an oversaturation issue (as long as you don’t live there).

Hell, the label for it is ‘neue Deutsche härte,’ specifically labeling it as German property, and if your country’s that gung-ho about how to handle the music of a sub-genre, have at it. But as with Norwegian black metal, any newcomers, even if removed by a generation or more, will have to face comparison to the names that hit it big or pioneered parts of the regional idiosyncrasies. Since Rammstein are the most widely-known NDH players by a large margin (though if memory serves, they preferred the term ‘tanzmetal’), they’re the ones to whom I’ll be defaulting for comparison, instead of OOMPH! or Eisbrecher. That I stalled out on both of those latter bands after a few EPs also makes for additional and easier justification, at least to myself.

Listening to Schattenmann‘s own approach, it’s not as interesting or viscerally exciting as Rammstein‘s material was in their prime. That could be attributed to a fair number of factors, with the intrinsically sapping effect of musical emulation’s nature looming large; however, on a more immediate level, the issues is that the band just doesn’t have the same range as Rammstein, whether put up against Till Lindemann‘s vocals and emotive capabilities, the occasionally baroque ornateness of Christian Lorenz‘s keyboard work, or just the patience to slow down and build five seconds of atmosphere before launching back into the bang-bangs.

They do make a much more palatable job of it than Stahlmann, whose Bastard album I could hardly stand when we received it for review, and the choice of sub-genre isn’t the only thing linking one S-mann to the other; Frank Herzig, who pulls duty as lead guitarist for Stahlmann, serves as the vocalist for Schattenmann. I’d like to think it’s out of an urge to do something with more depth than the comparatively cock-rocky flatness that Stahlmann put forth with that last album, as Schattenmann make efforts to incorporate piano, choral elements, and a few other nods to the classical influences that became more evident in Rammstein‘s albums with the passing years.

Unfortunately, outside of those little tweaks, the music is painfully repetitive. I found myself hoping that one particular song was their finale, as it had a nice feel of wrap-up to it, only to tab over and find that I had close to a third of the album still waiting. Drums, guitar, and bass all drudge on with barely any change-ups in tuning, tone, or timbre, and the monotony of the rhythms almost feels like punishment for anyone who bought this in hopes of hearing NDH clear a path for itself into the midst of the 21st century.

Of course, it should be remembered that this is a debut album, and that should get them some lenience, as they still (presumably) have room to improve on subsequent LPs. At the same time we can’t ignore that the first album is arguably where a band should show their most experimentation, reaching out to find anything that can stimulate them into continuing as a band at all. And by the sounds of this one, what interests the group is limited to a single stringent flavor.

THE BOTTOM LINE
No one but die-hard NDH fans need bother
Reader Rating0 Votes
POSITIVES
Polished production
NEGATIVES
Beats, riffs, and vocals so repetitive it feels like an EP's worth of ideas stretched out to make a contract-obligated LP
Nothing more interesting than what's been done in the style decades ago
3