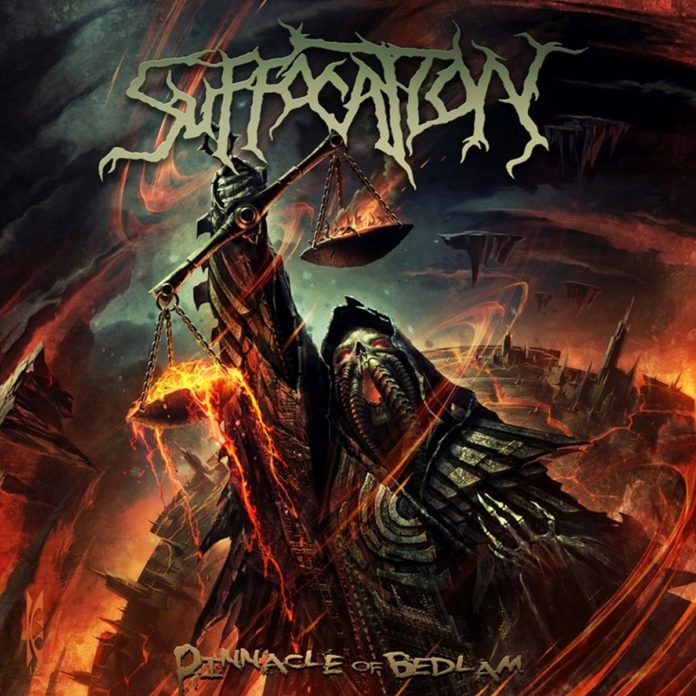 We all knew that 2013 was going to be a very special year for death metal as we would be seeing new releases by Defeated Sanity, Devourment, Guttural Secrete, Katalepsy, and Suffocation.  As you can clearly see from the title I am concentrating on the latter, and I know a ton of other death metalheads are as well.  There really needs to be no introduction to the ferocity and innovation that Suffocation has showcased for the past 25 years, because if you don’t know them by now then you are absolutely hopeless and have awful taste in music.  All you need to know is that Long Island’s brutal death metal legends are back with a new offering of 10 songs called “Pinnacle Of Bedlam“, and it is I, Jon Burkan, who is one of the lucky souls to get his hands on this long-anticipated release and tell all of you lovely sycophants about it.

If there is one thing that should be pointed out above all on “Pinnacle Of Bedlam“, it is the fact that it sounds like the Suffocation that we all know and love.   The departure of Mike Smith has nary left a scuff mark in the destructive machine that is Suffocation, and it is immediately known when ‘Cycles Of Suffering’ comes out swinging as soon as you hit play.  Frank Mullen’s trademarked, gruff presence beefs up the fretboard acrobatics that Guy Marchais and Terrance Hobbs are famous for, all while Derek Boyer’s bass is prominently keeping the pace and the drumming of Dave Culross accentuates everything perfectly, as well as bringing the music to new groovy heights.

There are some really heavy hitters on “Pinnacle Of Bedlam“, with each track having its own special strengths and merits.  The aforementioned ‘Cycles Of Suffering’, ‘Eminent Wrath’, ‘Inversion’, ‘and ‘Rapture Of Revocation’ bring forth the stinging brutality that we have come to rely on from Suffocation, but there are also some elements that we may not be accustomed to from this group.  ‘Purgatorial Punishment’ has a groove to it that took a little while to get used to, but after realizing how well it fits with the chaotic nature of everything else in the song I doubt having it written any other way would create the same impact.  ‘Sullen Days’, ‘Pinnacle Of Bedlam’, and ‘My Demise’ all have bits and pieces of that same groove factor and it works very well.  Don’t let the groove fool you, because ‘Purgatorial Punishment’ has a part right after the guitar solos that may be the single heaviest section on the entire album.  There is also the continuing tradition of re-recording songs from “Breeding The Spawn” because of how atrociously that album was produced, and this time the band has chosen to put ‘Beginning Of Sorrow’ on the chopping block, and I have to say this may be my favorite song on the album.  It sounds absolutely nothing like its ancestor and is worked masterfully.

Speaking of things working masterfully, the way this album was produced is golden from beginning to end.  Every single member is highlighted in just the right ways to let you know that not just one person holds the key to Suffocation‘s sound.   While you will mostly hear each note being played perfectly on a brutal technical death metal album, you can kind of hear Guy and Terrance’s fingers sliding up and down the fretboard at points, and for some reason I really like the inclusion of it to give the album a more “human” quality, if you will.  Derek’s bass is also a real treat to listen to since his tone fits perfectly with the rest of the group as there are many instances where I can just imagine him playing and doing his constant headbanging while plucking away.  The only problem I have is with how Frank’s vocals were produced.  Most of the time he sounds as ravenous as ever, but then there are some points where he sounds as if he doesn’t have any power to him.  This is rare, but still enough of an occurrence for me to have picked up on it.

As someone who wasn’t the biggest fan of “Blood Oath“, I was craving a new Suffocation album that would put me on my ass and beg for me, and “Pinnacle Of Bedlam” is that album.  This is a group comprised of veterans who know exactly what they want to create, bringing their old-school roots and ruthlessly smashing it together with a couple new elements to bring us something that is quite refreshing, especially in this sub-genre where everybody forgets about actual song-writing and wants to prove they are better musicians than the ones standing next to them.  I know there was also some skepticism when Mike Smith left again, but as I mentioned above, that isn’t anywhere close to being a factor in how wonderful “Pinnacle Of Bedlam” turned out to be.  All in all, this record is definitely one you do not want to pass up if you are a Suffocation fan.