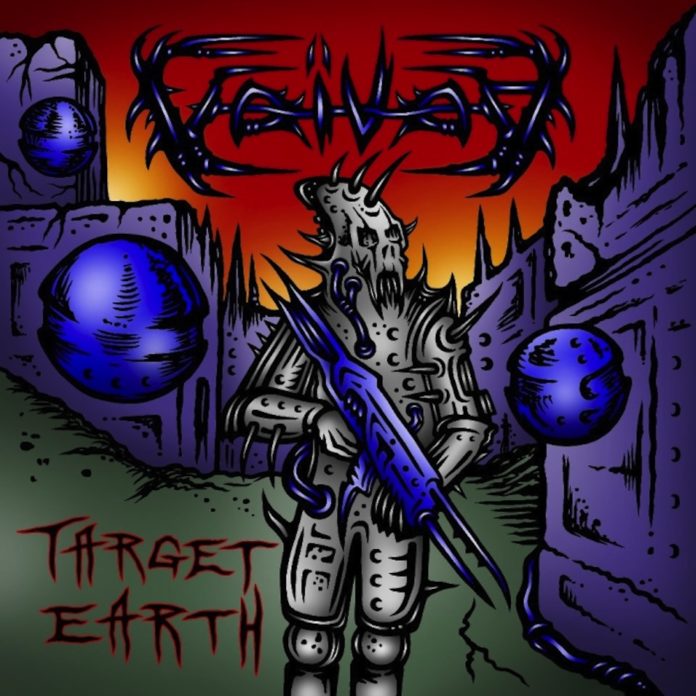 Voivod excel at occupying their own unique space. Since 1981, they’ve been one of the most forward-thinking, original bands in metal, progressive without giving in to self-masturbation, forward-thinking perhaps to a fault, and always staying true to themselves. What they don’t always excel at is being themselves; the past several years have been tumultuous ones for the Canadian four- (and sometimes three-) piece; lineup changes, the death of beloved guitarist Piggy in 2005, and more have dragged down the music for many fans, but there was an air of optimism leading up to Target Earth. Would the kings of freakout prog metal be able to reclaim their throne? The answer, fortunately, is yes. The newest from Voivod succeeds at reestablishing the band as a force to be reckoned with and reminds listeners that these guys are the original masters.

Voivod’s fans eagerly anticipated the record, due in part to the return of original bassist Blacky, with the hope that his influence would restore some of the group’s former luster. While Blacky certainly deserves partial credit for this reinvigoration, I’d say the quality of this album comes from the old-school influence he brings to the table meshing with the fresh approach by new guitarist Chewy. It keeps the band’s feet firmly planted in their classic legacy, but keeps their facing forward towards the future. The ten songs here show all the bizarre, skwonky riffage Voivod has established as their trademark, keeling and churning with odd times and eerie, dissonant intervals between thrashy, mathy riffs. The title track, “Empathy for the Enemy” and “Mechanical Mind” demonstrate variations on this theme, attacking with otherworldly guitar and Snake’s unmistakable vocal contortions. Around the halfway point, “Warchaic” shifts to a jazzy, uneasy quiet feeling that builds into a massive metal attack over the course of its seven-minute runtime.

On the back half of the record, “Resistance” channels a little of the early thrash Voivod feel with it’s palm-muted guitars and guitar solo calling to mind Kirk Hammett and Gary Holt. “Kaleidos” opens with a funhouse, psychadelic chord progression over a subtly odd meter, and “Corps Etranger” breaks down speedy riffs into a strange waltz and a stomping squawk. Throughout the band retains their signature stamp of weird – occasionally uncomfortable, rarely harmonic, often strange, always Voivod. The record begins how it ends, with a buzzing bass leading into yet another traditional riff for one final minute of rock to see us out. Maybe it’s in this last minute that Target Earth is effectively summarized – Voivod is recharged and taking no prisoners. Earth, you’re next.