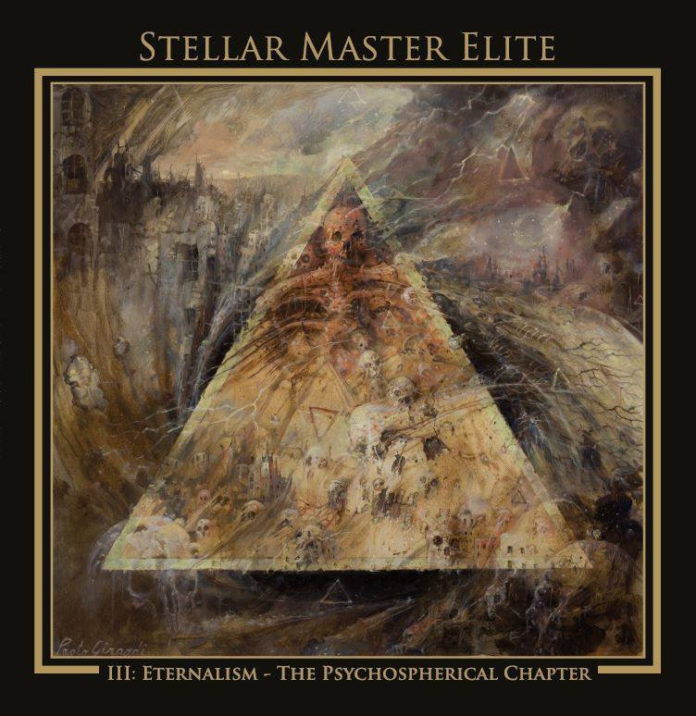 Having not heard the previous two chapters released by this German outfit, I was curious to find out how they’d execute their described blend of black and doom metal; going by the names of the band and album, it would at least be ambitious.  And it was, going for a semi-symphonic arrangement of the instruments with sizable acoustics in the mixing lending it a sense of expansiveness well-suited to their hyper-cosmic setting, while the visceral black metal gave it a human element to keep things grounded.

As the album progresses, more experimentation and deviation from the base settings emerge, coming to life in touches such as burbling synthesizers, extra harshness to the vocals, moody interludes, and more flourishes added to the percussion and guitar parts.  Tucking in some sparse audio samples here and there provides another element stretching things past the common range, and the ‘news records’ sound quality to these lends the storyline Stellar Master Elite have going some sense of having been a long time in the making.

On the downside, while the dense fog of cold grimness is sturdy beyond a superficial level, there may not be a lot to really reach out and grab you, or stick in your ears once you’ve put the album down.  There seems to be more focus on dependable work-horse riffing than on spacy madness, to put it one way.  And really, having heard too many releases where a firm foundation gets left out in favor of jamming in stuff that screams ‘look at us!’, I don’t count it as too much of a fault against this album, I just wish there had been more ostentatious riffs to get tangled in my memory.  And to be fair, there are big, powerful sweeps of sound and harmony, drawing from the more majestic sides of their two main styles, but it’s something they work up to instead of throwing it in your face from the start.

Taken as a whole, SME have put enough work into both the basic and the ornamental parts of the music for III: Eternalism – The Psychospherical Chapter to hold up well to repeated listening for those who want something to scratch their black doom itch (and if they want it with some sci-fi flavoring, all the better). If the band is expecting people to use the full title when casually recommending it to friends, though, they’ll be in for some disappointment on that front.