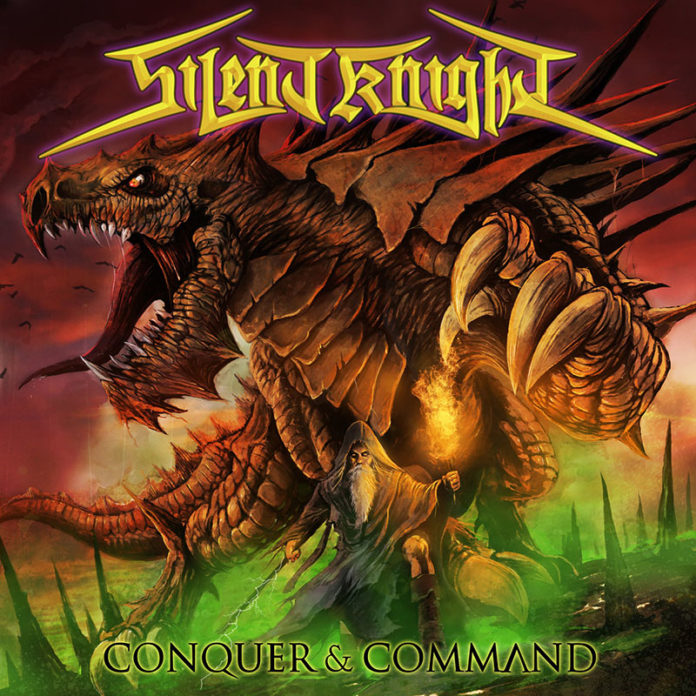 “One of Australia’s leading Power Metal bands” (at least, according to their press release) Silent Knight are about to drop their second full-length record, and by god does this thing have some serious balls. No one would ever accuse them of being part of the “happy metal” pantheon of supposed “power metal” bands that are so saccharine in their approach that they might as well be off writing medieval ballads with Ritchie Blackmore. No, what we have here with Conquer & Command is heavy fucking metal the way the gods (see: Judas Priest) intended: swords & chains, big brash riffs and blazing solos, percussive thunder to cave-in skulls, and a big pair of brass balls!

Seriously, if these guys aren’t students of the gospel according to Painkiller I’m not sure what in the hell they’ve been consuming as an alternative but I want some! The whole album is fast, fast, fast, with no let up at all. Vocalist Jesse Onur Oz is fantastic, not only keeping up with the band’s all-out assault, but soaring above it with complete ease, his voice textured and interesting in each passage, giving the music its flare and verve. Speaking of Painkiller, drummer Paul Wrigley is so obviously cut from the same stylistic cloth as Scott Travis it’s ridiculous. The man is just rumbling away under all the chaos of the immaculately played guitars, building not just the backbone of the songs but the entire skeletal structure, bringing order and stability to the runaway train that is the guitar interplay between Cam Nicholas and Stu McGill.

One gripe about the album is that the lack of variation in speed makes it a little more difficult for the listener to groove and invest in the barrage as a whole. Something a little more mid-paced would have been not only suitable but beneficial. Having said that, with the musical being as headbanging-ly fantastic as it is, a slight lack of variation is just a trivial matter. Few things in life are perfect anyway, and few bands score a perfect record on just their second full-length.

For what it’s worth, if you’re into quick-picked, ballsy, full-on power metal, then Silent Knight have got the goods. Check this shit out!