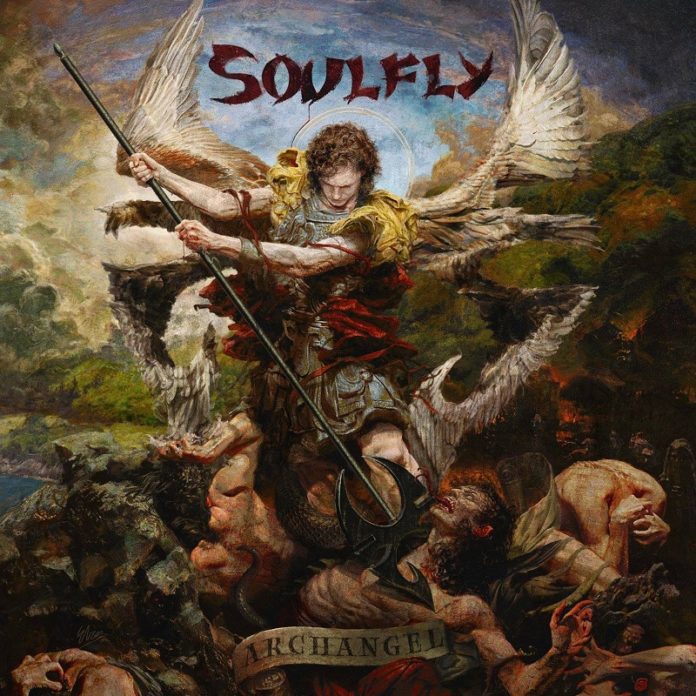 The year is 2015, and in it we see the release of the tenth album from groove metal pioneers, Soulfly. The Cavalera brothers are back after the critical success of Savages, and are looking to put some of the emperor’s new groove into their metal. These veterans bring in a performance that although showcases their abilities, doesn’t quite live up to the standards they set for themselves.

Archangel kicks off with brutal force. Percussion fires off at sonic speed, guitars duel between heavy sludge and blistering high tones, and a bass creeping along in a very noticeable way with some in-your-face lines. The vocals come in as a primal growl with a commendable amount of attention invested in clear enunciation. All of these elements are a potential recipe for success, and are implemented in the first few tracks along with some dramatic spoken word and horror-themed ambiance. However, about halfway through, the spark and energy seen in the first half of the album seem to dwindle, and the whole production slows to a trudge.

The album is laced with lyrical themes regarding mythological concepts that breed plenty of interest, but at the dreaded halfway point, a song that essentially sounds like the metal version of “YOLO” crashes the party. This abomination, swaggering in its own tough-guy pomp and featuring a singer who sounds like a cross between a howler monkey and an angsty teenager, breaks the listener out from what was previously a very immersive experience, while providing an entirely unwanted contrast to the mature and intriguing lyrical content.

Archangel has a hard time recovering from its self-inflicted injuries and just isn’t capable of restoring the vibes and power that the first half possessed. The performance fizzles out as it goes, which is shocking seeing as the run time is only thirty five minutes. With such a short performance, one would expect that every minute would be spent delivering a fearsome performance intent on devastating the listener, and yet things slow to a crawl and there are even some sections of noodling that are incredibly out of place. While ‘Titans’ does bring some of the magic back and keeps the finale from being barren, the brief oasis in a desert doesn’t make the surrounding area any less of a wasteland.

The spirit and energy coupled with exceptional creative decisions that the album blasts out of the gate with are decapitated by a song that only serves to derail the album from its direction and purpose. The band simply can’t recover their footing afterwards and the remainder of the album falls through, leaving the listener with an unsatisfactory conclusion. While there is certainly some material on Archangel that is worth your time and consideration, I would be cautious about paying for a special edition.

IN A NUTSHELL
Worth digging through the rough for the diamonds, as long as you manage to keep away from the dirt.
POSITIVES
Starts off with a bang
Displays some expert playing
NEGATIVES
The energy fizzles out
Immersion breaking mix
3