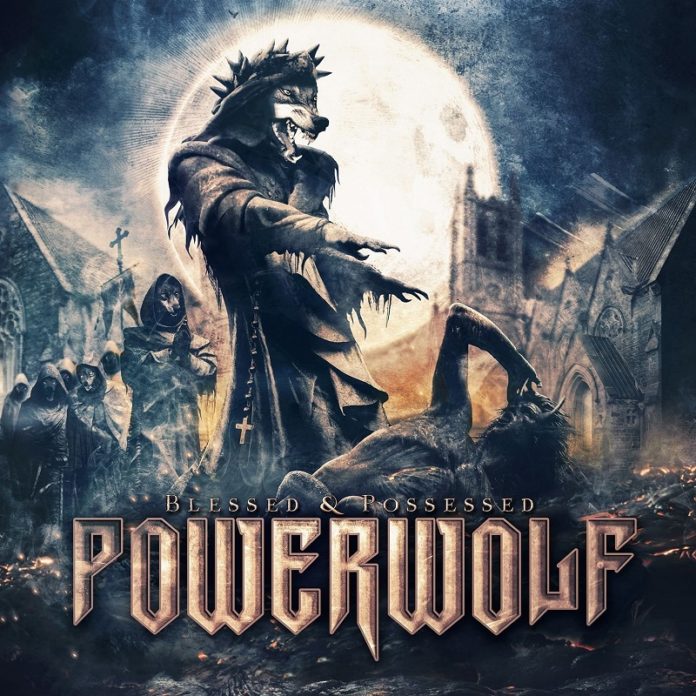 My interest in Powerwolf started back in 2008, when I listened to “We Came to Take Your Souls” for the first time. I was immediately attracted to the interesting “organ”-driven music that they were creating. Since then I’ve seen them a couple of times already (and also interviewed them twice) and my enjoyment of their music has only increased.

Although the label has been used several times in the past, I feel that Blessed and Possessed , the band’s sixth studio album, is the first one in which that descriptor becomes completely applicable. It is an album in which the machine-gun drumming has become the center of attention, coupled with fast riffing of a NWOBHM inclination, making the whole experience a wild ride.

The best example of this full adoption of power metal is the terrific song “Army of the Night”. While still maintaining the kind of details that make it a Powerwolf song (the full-and-center church organ being one), it is also a track that would not have seemed out of place in Sabaton‘s critically-acclaimed Carolus Rex. While for some the comparison might border on being hurtful (nobody wants to be told they sound like somebody else) I feel that it really exemplifies the kind of power that Powerwolf are conveying here. The same can be said of, for example, “Higher than Heaven” and “Blessed and Possessed”, both of which also serve as a clear testimony of the position that Powerwolf are destined to occupy in the genre. The wolves have written the kind of songs that can get your heart racing and your fist pumping as soon as the first notes go out of the speakers, and it’s fucking glorious.

Even in those occasions in which things are slowed down, as in “Let There Be Night” and “We Are the Wild”, the music does, for the most part, continue to keep you on your toes. Although there are some occasional breaks in the rhythm that don’t work as well as we’d wish (halfway through “Higher than Heaven”, for example, things slow down more than necessary) most of the time things are kept at lightning-fast speeds.

All and all, it seems that with Blessed and Possessed the band decided to bring things up a notch, and continue doing what they do (the cheesy lyrics, the church organ, and more Hallelujahs than you’ll hear at the Sistine Chapel) heavier and faster. With a terrific production, and a great selection of songs, this is an album that will definitely be among the best ones this year.

Of course, as a band that seems to generate either love or hatred from its listeners, Blessed and Possessed won’t change anyone’s opinion. Powerwolf delivered precisely what their fans expected, and precisely what their detractors hate. And, honestly, for whatever it’s worth, I’m very glad they did.

IN A NUTSHELL
An amazing album that will please all fans of Power Metal, as well as those who just happen to enjoy church organs in unusual settings.
POSITIVES
Powerful as fuck.
NEGATIVES
Once you know the tropes that Powerwolf indulges in, you'll catch them in every single track.
4