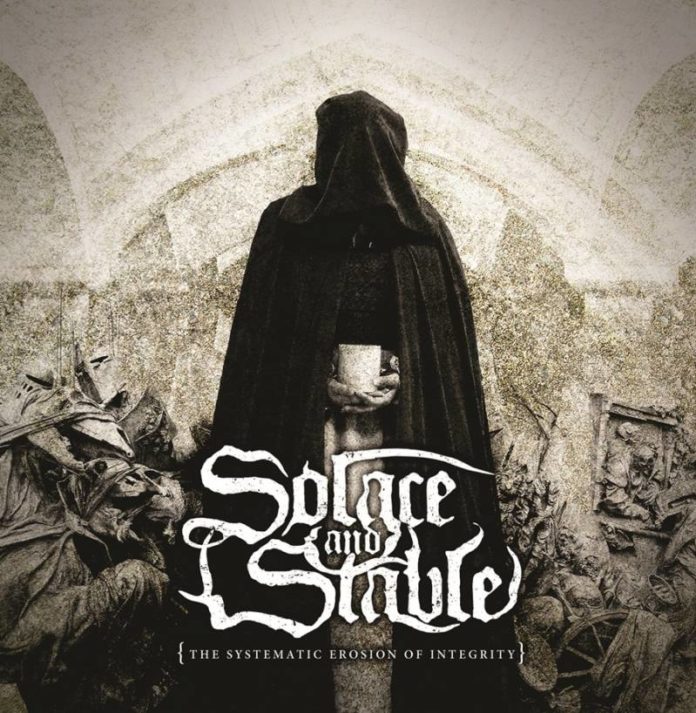 I wonder if Between The Buried And Me are aware that they’re progressive metalcore’s Helen of Troy, and that Colors was the album that launched a thousand knockoff bands. I mean, it sure seems like it – it’s not hard to find a band on any level that suddenly was inspired to throw in the odd sweep arpeggio or weird time signature to punctuate their circa-2005 breakdowns. What BTBAM has that their imitators don’t, besides the sheer technical skill, is the ability to conjure and then control the chaos in their music. But that’s getting off topic – we’re here today to discuss the new album, The Systematic Erosion of Integrity, by yet another band from my hometown, Solace and Stable. And man, they’re a few years behind that first big BTBAMcore push, but it’s at least competently executed and has some bite to it, unlike SOME bands from my city.

I want to start by commending some positive aspects of this record – the songs are varied enough that they avoid the easily labeling of lazy BTBAMcore, which is a word I just made up last paragraph and I’m not over the novelty of it yet so I’m gonna keep using it for a while. The guitar lines are interesting and impressive, and the band avoids falling into the trap of being too metalcore with their fun drum lines that remind me of Converge, but less spastic and with more blast beats. Tracks like “Satisfaction” have momentum and keep a solid clip, and “The Apparatus” rings like a melodeath-inspired version of a jam from Alaska. I gotta say, though, the vocals are just kind of…there. Though certainly competent, they remain pretty much the same throughout the album’s 44-minute runtime, which is long enough to get sick of them. Songs like “Volatile” don’t help; the last thing I need 2/3 of the way into your record is for you to go tough guy on me.

Despite that, the band keeps their game tight throughout the album’s duration. “The Hollow Present” features some standout guitar and drum work, before the band drops out halfway through for a layered, soaring instrumental passage I greatly enjoyed. “Past of Persistence” features some neat, Faceless-esque riffing that sounds like one guitarist got really into Cryptopsy while writing this album; it’s an appreciated gesture in a genre I mainly deride for its laziness (although you totally got that ending from “White Walls”, guys, don’t even try to cover that up).

Overall, I’d say that if you’re looking for something to whet your appetite before The Parallax II: Future Sequence comes out next week, you can do a lot worse than Solace and Stable’s recent offering. And considering the metal scene of the city this came from, I can at least give it some props for being something competent, engaging and occasionally impressive in an area where all of these things are lacking.[signoff predefined=”Signoff 1″][/signoff]