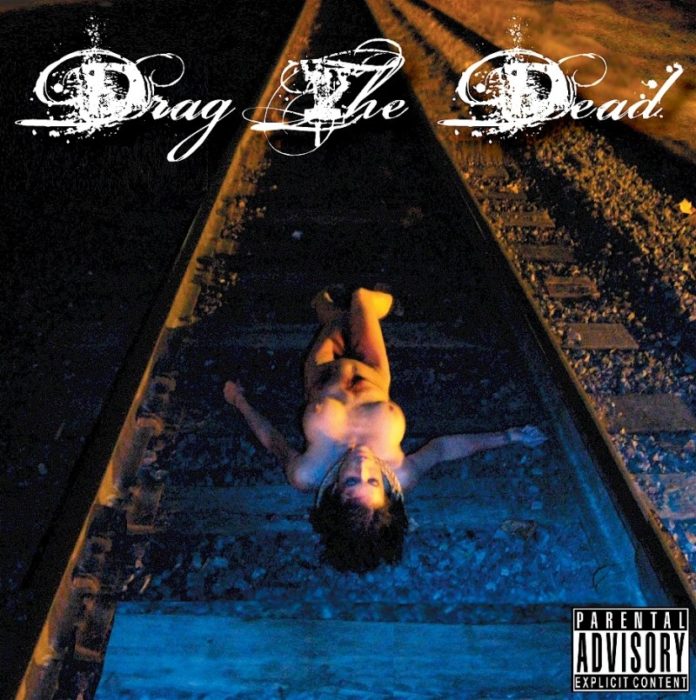 Some albums dilly daddle around with no purpose or point, leaving the listener confused at about what exactly they listened to. Even worse, concept albums often have a tendency to be obsessive, self-indulgent, and sometimes, just plain bad. With Drag the Dead‘s new self titled album though, it’s clearly not the case; it’s a straight forward sonic assault of proudly brutal death metal. While it makes no qualms about what it is, Drag the Dead does have a running theme, but if a death metal band bases an album around death and brutality, is it really a concept album? Technically, no. But bare with me as I try to explain why in this case it is and why for the first time ever, I am comparing an album to a car crash, but in a good way.

From the get go, the album tries to create a feeling of unease with non musical tracks. Not a fan? Get used to it, there are several in the album. They range from running waters and white noise in the intro, to confessions of serial killers and interviews with their intended victims. While people may actually skip over them and get right to the music, they would be missing out on a critical component of the album; the interviews are so brutal with the explicitness in which they describe the crime scene that I actually believe it’s the death metal of spoken word. I’ve never actually been one to listen to these so called “filler tracks” but in this case I was just sucked in, I was totally creeped  out and utterly disgusted, they actually serve a purpose! When I first heard those tracks, I was ready to hit the skip button, but I became entranced and almost like witnessing a car crash, I couldn’t look away.

But, let’s not forget that this is a music album, how does the music fare up? I don’t usually recommend people hook up their subwoofers at night, but if you have them make sure you use them. The bottom end (the bass, bass drums) on this album is absolutely monstrous. As soon as “Blindsided Menstural Holocaust” kicks in, you’re assaulted by a subharmonic wall of frequencies that are more felt than they are heard.  It’s not the first time that I’ve heard it used, but it’s certainly one of the most effective; it really puts some weight behind the sledge hammer and boy, do I love it. Too bad the same can’t be said about the high end frequencies. While it’s understandable that Drag the Dead wanted to make an album as ballsy and with as much umph as possible, they sacrificed almost all the high end. It goes to such a point where I’m not actually sure that they even bothered to actually mic the cymbals, it’s that bad. The only time that you actually hear anything remotely resembling the high end frequencies is the “guitar-solo-mixed-with-a-jet-engine” thing during “The Stabbing” that they do. I’m not sure what they were trying to accomplish, but do yourself a favour and turn your headphones way down when you listen to it.

Sound wise, Drag the Dead are a lot like mid 90’s Cannibal Corpse and Morbid Angel; the music ranges from grindcore fast to an almost sludge metal type slow palm muted attacks. It’s a very “warm” sounding album that’s reminiscent of a low budget (but not black metal low budget) vinyl release. The album takes its time and confidently pounds away track after track. Combined with NSFW lyrics in every stanza, this is a textbook definition of brutal death metal both in sound and execution; complete with tracks like “Sledgehammer to the Cunt” “Shit Fucked and Forgotten”  Drag the Dead appeals to the more violent of us but shouldn’t have other gems like “When They Walk Again” skipped over. Musically, the debut release of Drag the Dead is sure to please most if not all brutal death metal fans, by song titles alone.