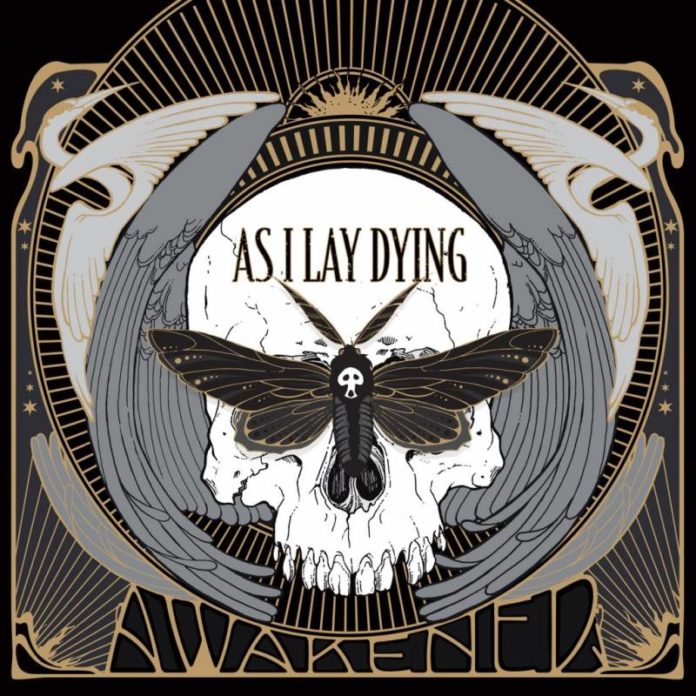 As I Lay Dying has pretty much cemented itself as one of the top dogs in metalcore; the one-two punch of An Ocean Between Us and The Powerless Rise made expectations for their follow up skyrocket. They’ve always walked a fine line between a heavier, almost thrash style of metal (no they’re not actually a thrash band, no shit) and the softer, cleaner style of most of their contemporary’s. What’s really helped As I Lay Dying rise to the top was that they have far more skill than almost any of their peers and are better songwriters than most also. So does their new album, Awakened, live up to the hype that’s been growing since 2010’s The Powerless Rise?

Simply put, Awakened is a natural progression for As I Lay Dying; the style they play on their new album is extremely  similar to anything you’ve heard on a lot of their previous works. Awakened takes no time getting the party started with the song “Cauterize”, a rather good showcase of what the band is capable of: furious, catchy riffs that blend into a clean singing chorus. In fact, you could argue that most of Awakened follows this sort of formula: a fast or slow start coupled with a rather soaring chorus. It’s not bad, but it feels just a tad too predictable. Some people would say that it’s just As I Lay Dying playing to their strengths; they’ve always had a knack for knowing when exactly to knock off a riff and dive into a chorus to get some energy flowing into a song. After three albums though (a lot of people would argue that An Ocean Between Us is really the beginning of “modern” As I Lay Dying), things are starting to show their age. Thankfully the guitars and drums are as great as always: As I Lay Dying seemingly always has a mountain of tricks up it’s sleeve when it comes to their guitars and drums. They really are a treat to listen to, especially when compared to some other metalcore bands out there.

Awakened tends to lean towards the “cleaner” side of things, especially when compared to The Powerless Rise. It seems like almost every song tends to eventually dissolve into a rather bombastic clean-singing chorus, and to be honest it feels quite forced. Tim Lambesis’s harsh vocals sound great, while Josh Gilbert’s clean vocals sound overproduced and robotic. That element was always there on their previous albums, but it’s much more noticeable on Awakened than anything they’ve ever done in the past. For some reason, As I Lay Dying feels the need to insert one of these choruses into almost every song on the album, really messing with the great pacing that some of their previous works have had. It’s weird, because if you take each song just by itself than most of them are actually pretty good, if not great (“Defender” might have one of the catchiest openings in metal that I can remember) but listening to the album from beginning to end is not nearly as enjoyable as it should be. Plus, if you do that, you can really see the formula that As I Lay Dying follows on this album clear as day.

Production wise, Awakened is thankfully As I Lay Dying‘s best sounding album to date. Gone are the tinny and harsh sounds of An Ocean Between Us, and the hollow soft-sounding ways of The Powerless Rise. Seemingly everything has been smoothed out and mastered well…except for those damn harsh vocals. I might be beating a dead horse, but they really do sound overproduced and forced on Awakened, in a way that was never apparent on any other album they’ve done before. Guitars sound great and have an absolutely killer tone to them, while drums are sufficiently meaty and thump-worthy. It’s a shame about those vocals though; they can be really jarring at times, especially if you listen to them with a good pair of headphones on.

If you’re an As I Lay Dying fan (like I am) you’ll most likely be satisfied with Awakened. There are some killer tracks on this album, but as a whole you really can’t shake the feeling that they’ve taken a step backwards in a few aspects of their music. If you’re a fan of metalcore but for some reason has avoided As I Lay Dying for one reason or another, give Awakened a listen. Chances are if you’ll like them, you’ll like their previous albums even better.