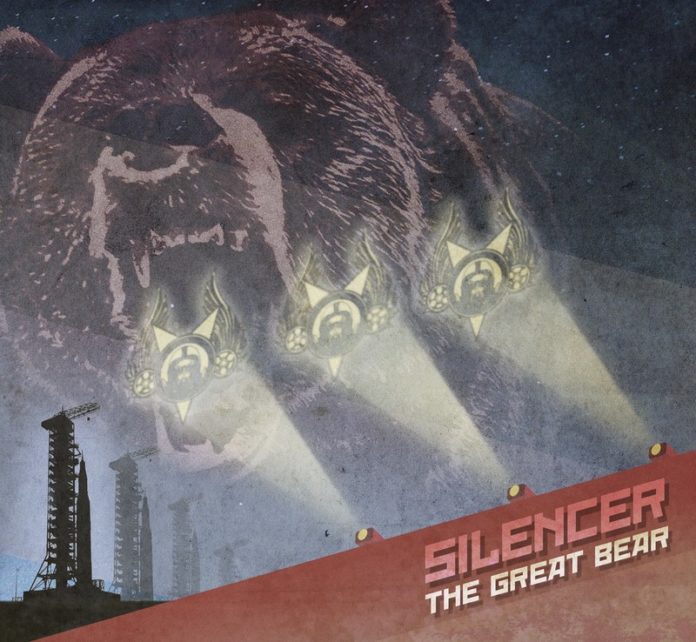 The music scene can be split into two camps;  bands that take risks and bands that don’t. The risks can vary in intensity, from Amorphis’giant genre leaps to Turbonegro‘s general evolution. Some are hits, while others miss by such a long shot that would make Roberto Baggio blush. Retrospectively, it’s easy to see whether their outcome was successful or not; it’s simply a matter of analyzing fan reaction. With some albums however,  it’s instantly clear that the ship has sprung a leak. It’s clear that some albums just don’t hit their intended mark.

It’s clear from the onset that Silencer wanted to go for a concept album. Though, cold war era power/black/rock ‘n’ roll metal is something I’ve never thought I’d be hearing. It’s a tad beyond me and I fear the same for other people. The combination of soviet era military drums and propaganda interludes doesn’t really help build atmosphere nor does it help create an alternate universe for the listener. In reality, it just confuses me. Vikings rock, it’s common knowledge, but Lenin? I’m not so sure.

Concept wise, the album is a miss; it’s like making a porno themed around Whistler’s mother. You could, but why? The songs don’t offer much in the way of excitement either; through the mix of their multiple genres Silencer seems to have attempted to create a visceral edgy type of hard rock/metal that fits into some sort of rocking dystopic future, but just ends up creating a hollowed out version of what other bands have done more effectively several times this year. Unfortunately, The Great Bear is not that fun to listen to and just barely maintains my attention from song to song, rather than pouncing on me like a Kodiak, it licks me like a Labrador. Though it tries, the album struggles to take off until “Orders/Noble Sacrifice” more than half way through the album. It’s really unfortunate, since what follows is a rather solid metal approach that reminds me of an edgier Systematic. The solace that it provides, may have arrived a tad late. It’s like trying to shock awake a corpse.

While Silencer‘s risk in attempting this record should be saluted, the overall outcome may not get the same treatment. It’s a clear case of love it or hate it; The Great Bear will do nothing if not divide fans.  While some may love the feel, most may not stick around to hear the real meat of the album. And while there are good songs on the record, most people might not get to them.