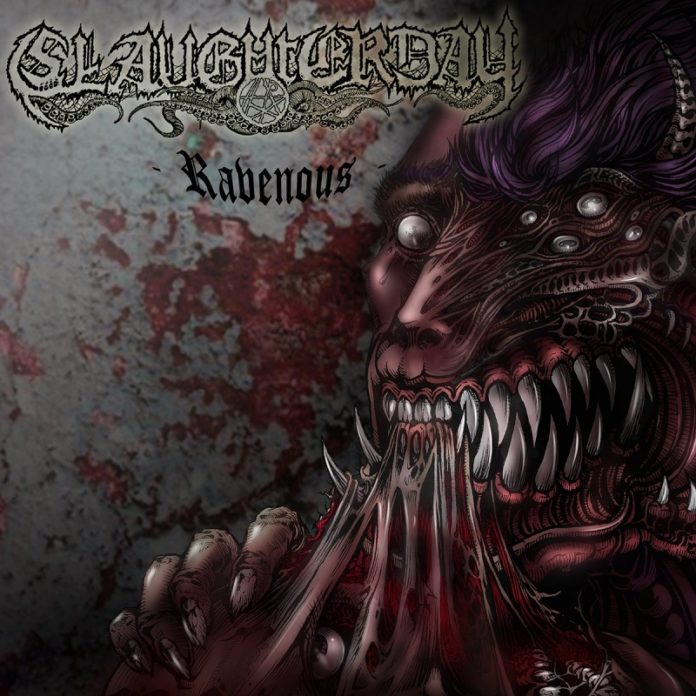 Following up to the well-received 2013 LP Nightmare Vortex, Germany’s Slaughterday drop their new EP Ravenous, building off the promising and striking sound of their debut to develop a more voracious, unhinged twist on old-school death metal.

Despite Slaughterday‘s European roots, the style of death metal they specialise in feels distinctly American, drawing parallels with Bay Area bands such as Autopsy. However, they blend their worship of death metal royalty with a contemporary fusion of pull-no-punches thrash, hardcore and a touch of doom. While they keep a solid sound that’s easily classifiable as classic-style death, the band draws a ton of elements from the genre’s close relatives, injecting some remarkable new ideas into the death metal framework that seem both fresh and familiar.

While many old-school death metal revival bands fall into predictability and over-usage of genre conventions, the song structures on display on Ravenous are dynamic and constantly shifting between animalistic gallops and murderous trudges. With the dynamism on display here and the band’s efforts to push their ‘old school’ style to its boundaries, it wouldn’t be too strange to compare them to powerviolence acts such as Iron Lung (who also feature two members and a drummer as the main vocalist, coincidence?). There’s no excess on this record. No extra bars and no lengthy solos. Just pure primal, sadistic energy that constantly throws surprises at you.

For a two piece, Slaughterday have an amazingly tight sound, and this EP is the perfect demonstration of the band’s talents. Packed with even more energy and twice as fast, aggressive and psychotic as the material from their last record, Ravenous is the perfect jumping-off point for a more complex and progressive sound for the band. Slaughterday continue to evolve and impress and we can’t wait to hear more from them.