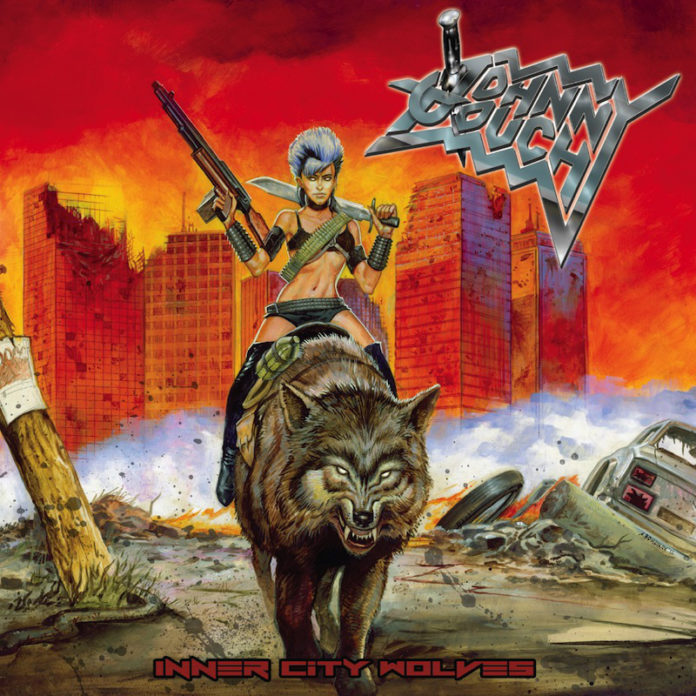 I’m a big proponent of the new wave of traditional heavy metal. Since the movement kicked off in the later part of the last decade we’ve been gifted with many great acts flying the flag for true, old school metal, and it has been a lot of fun. Bands have been coming out of the woodwork and proving that there are still new possibilities in the old flying Vs and leather jackets, and the best of them have been improving with every album. While I’d like to say that Johnny Touch‘s debut reaches the head of the pack, the band still has some work ahead to reach the levels of quality being put forth by the likes of In Solitude, Enforcer, and Skull Fist.

Inner City Wolves has moments of brilliance, opening with the galloping, Scandinavian-styled “It’s Alright” that showcases Pahl Hodgson‘s untreated vocals. He’s a great singer for this kind of material, his dramatic delivery recalling Tony Rose from Geddes Axe and other unsung NWOBHM heroes. The riff-work on the album is of a generally high caliber as well, occupying the same loose, rough-and-ready zone that Tokyo Blade‘s early material was master of.

The biggest problem with the album is that the band spend too much time trying to establish a mood and not enough time making use of their great riffs. The worst example of this problem is on closing track “Black Company”, where guitarist Jamie Whyte spends a ton of time noodling around with an acoustic guitar and building the song’s atmosphere. The core riff is actually quite an interesting one and is thus under-utilized to the detriment of the song. “Lady Strutter” also suffers from the problem, although in that case it is due to an overlong intro.

The production also leaves something to be desired. Just because your music is inspired by metal from the 80s doesn’t mean that you have to adhere to the same sonic limitations those records had to. Now, when a dated production-style truly lends something to the music (see In Solitude‘s latest album), that’s one thing. But in the case of Inner City Wolves, an Enforcer-style modern traditional metal production would have been a huge benefit and would have made these specific songs sound MUCH better.

Johnny Touch is certainly a band to watch out for, as there are some excellent moments here. It’s just that the band’s best ideas seem to result in excellent songs only about half of the time. Inner City Wolves may be a flawed document, but if NWOTHM is your bag, then it’s still a worthy addition to the cause.