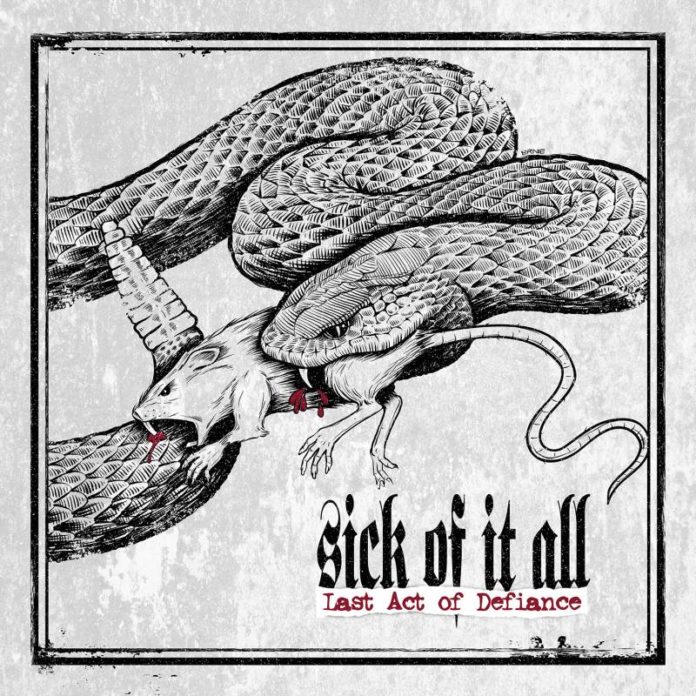 The importance of Sick Of It All to the revered New York hardcore scene is nearly impossible to overstate; with a career spanning nearly three decades, and 10 albums under their belts, Sick Of It All bridge the gap between the new and old school.  The Last Act Of Defiance, their new full-length, demonstrates that, despite the years, they have lost none of their aggression.

The songs in The Last Act of Defiance run the gamut of sounds in hardcore; heavy groove-oriented tunes like “Road Less Traveled” and “Part Of History,” crossover thrash on “Outgunned,” and even melodic punk “Beltway Gateway”, all make for a very diverse record.  Sing/yell-along gang vocals are on every song, effectively turning every track into an anthem, and will have you shouting along pretty early on into the album. While they may not be the youngest band on the block, Sick Of It All manage to sound as energetic as any of the new kids, and have a chemistry that can only be obtained by years of experience.

Lyrically, Sick Of It All take a political stance, expressing outrage with the government, war, and anything that can be perceived as oppressive; since this is the standard for a punk band, they’re not exactly the most original of topics. There are already so many songs and bands dedicated to “fighting the man” that it’s practically meaningless at this point; while at one time slogans like “fight the power” actually stood for something, now it’s just something for the crowd to chant along with their favorite band. If this were a band of rebellious teenagers trying to express themselves I could just chalk it up to immaturity, but these are grown men writing mosh-pit anthems (ironically, my favorite song of the record, the aptly-titled “Act Your Age”, seems to address this grievance). I’ve heard all of these lyrics before, and it’s unfortunate that The Last Act Of Defiance can’t match its sonic diversity with some equally well thought out lyrics.

The production is handled by Tue Madsen, who produced the previous two albums, and has built an excellent working relationship with the band. For Sick Of It All, the best approach in the studio would be to try and capture their live sound, and Tue has managed to do exactly that; the drums, guitar, bass, and vocals are all aggressive and up front in the mix, with just the bare minimum of polish in the tone. The gang vocals have a heavily overdubbed sound, but that’s pretty much par for the course with any hardcore record, and isn’t too distracting. Although there’s enough low-end to give the riffs a bit more crunch, with the vocals and the d-beat style drumming The Last Act Of Defiance is still placed firmly in the punk rock category.

If you like your hardcore fast and aggressive, with a very traditional sound in the vein of Agnostic Front or Madball, The Last Act Of Defiance is an album you won’t want to miss. Even though I found the lyrics to be pretty mediocre, the music is just as vital as ever, and proves why Sick Of It All are one of hardcore’s most beloved and elite acts.

Great hardcore with some so-so lyrics
Diverse set of songs that have a little something from every era of hardcore, excellent production
Lyrics are a little to simplistic and one-dimensional
3.5