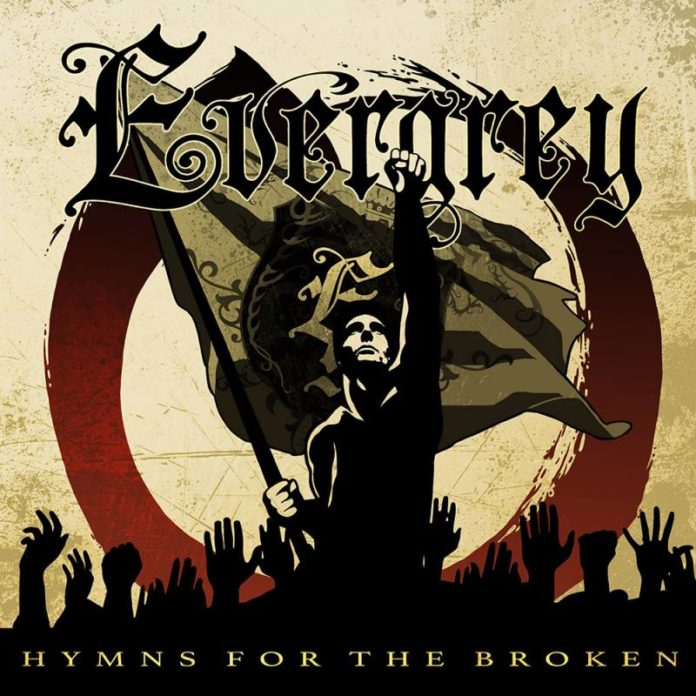 Gothenburg, Sweden, has become a household name in melodic metal, producing some of the most beloved and successful acts in the world. The sounds range from the raging death metal of Dark Tranquility and In Flames, to the thrash metal of The Haunted, and such notable power metal acts as HammerFall and Dream Evil. Formed in 1995, Evergrey joined the ranks of Gothenburg’s elite, playing a progressive rock-influenced version of power metal, with a decidedly darker, gloomier tone and image.

2014 finds Evergrey releasing their ninth full-length studio album, Hymns For The Broken, with long-time vocalist/guitarist Tom Englund being the only remaining original member. Despite the high turnover, Evergrey have managed to keep a pretty consistent sound, with some heavy but melodic guitar-work and Tom’s clean, powerful vocals. That streak continues with Hymns For The Broken, with some good crunchy riffs that wouldn’t sound too out of place on an In Flames or Dark Tranquility record. There are a lot of keyboards and synthesizers that almost push the music into electronic rock, as you can hear on the tracks “Wake A Change” and “Black Undertow”. There are many changes in style throughout the album; “The Fire”, for example, has a riff that sounds like it belongs on Slaughter Of The Soul by At The Gates, but quickly switches direction when the vocals start up, going into a modern gothic metal sound, in the vein of Evanescence.

While there are plenty of heavy riffs for the headbangers in the crowd, as well as plenty of somber melodies for the fans of all things gloomy (looking at you, Katatonia fans), for the most part the music is just a little too tame. “Wake A Change” is a power ballad that sounds a little too melodramatic for its own good; rather than giving a melancholy, heartfelt vibe, it comes off as a mall-goth anthem for depressed teenagers shopping at Hot Topic. “Missing You” is a similar tune, mostly piano-driven, but no less cheesy sounding in its execution. Essentially, Hymns For The Broken, as a whole, comes off as an album by H.I.M., if they incorporated a little melodic death metal style riffing into their sound. The are some genuinely awesome riffs, but the keyboards and synthesizers really declaw what could have been a real ferocious beast of an album. “The Grand Collapse” manages to escape this formula, sounding like something out of Katatonia‘s Night Is The New Day.

The production is pretty much on par with most modern metal records coming out of Gothenburg, with big emphasis on guitar and bass, with a healthy level of vocals in the mix, and larger than life drums. The keyboards mostly add layers when the riffs are good and heavy, but really take over the sound when Tom is singing. There are vocals layered in all over the place, with occasional choirs that push the music into symphonic metal territory; there really are a lot of influences mixed into Evergrey’s sound, and they’re pulled off pretty well.

Killer riffs don’t always make a great album, as you’ll learn with Hymns For The Broken; while there are plenty of things to like about this release, it still feels a little too manufactured. Evergrey have a sound that is certainly more suited for arenas and, to be fair, they probably influenced a lot of those Hot Topic goth bands I mentioned. The problem, though, is you aren’t listening to this album live in a stadium, and when you have Hymns For The Broken in your headphones, the filler is much more obvious.

Crushing riffs brought down by mostly mediocre songwriting
Some catchy
Intense riffs, loads of melody
Keyboards/synthesizers are a little too heavy handed in the mix at times, power ballads are pretty cheesy, and there's a lot of filler
3.5