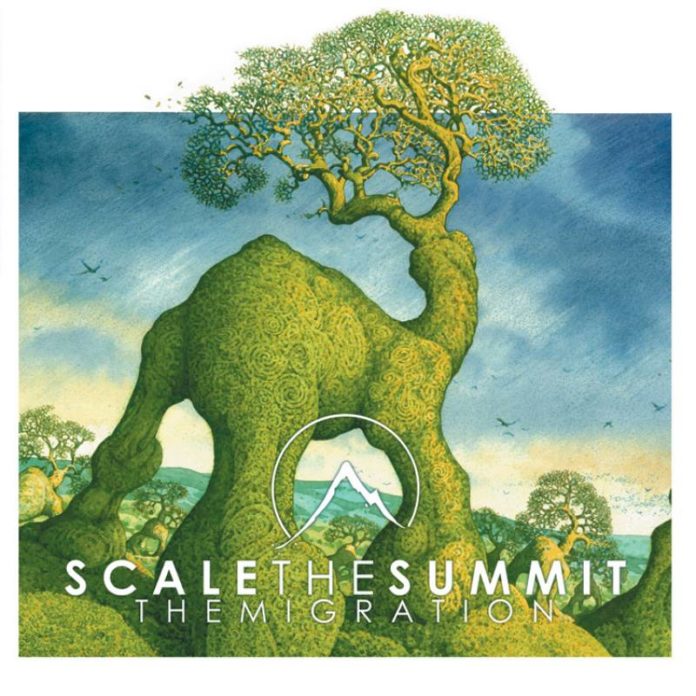 The Migration pretty much picks up right where The Collective left off; instrumental metal with a hint of technicality and progressive elements. Really, just check out the opening track “Odyssey” to get a feel of the rest of the album – it opens up with some impressive guitar noodling that instantly sucks you in and makes you interested. Riffs build upon and compliment each other, until the point where you might be listening to the same song, but only in name. Then, seemingly with a snap of their fingers, they bring it all back to where it started. Scale The Summit‘s propensity to build up songs and than break them down continues to be one of their biggest strengths on The Migration. It’s always interesting to see what they come up with next, the differentiation between songs are great because it ensures that you’ll never be bored while listening to them.

The guitars sound great, their tone has been tweaked a bit since The Collective. It’s a bit warmer than on their previous albums, and it integrates nicely into the band’s overall sound. Their albums have gotten more “organic” sounding as they’ve been released, and The Migration is no exception. The drums also sound good, but the best part about them is just listening to all the interesting fills and footwork that are interspersed throughout the album. For as great as the guitars are, the drums are honestly better.  Zoning out and just listening to them is sometimes a truly amazing experience.

For all the good that The Migration does, it doesn’t exactly raise the bar much further than The Collective did. For people that are maybe just discovering Scale The Summit, this doesn’t really mean anything to you – just know that the two albums, whichever one you choose to start off with, sound extremely similar. This is sort of the same situation that I found myself in while listening to Gojira‘s last release in that it wasn’t exactly any different from their previous albums, but it’s so good that you just don’t really care. It never gets tiring hearing all the different shifts in the dynamic of the music.

The only bad thing about The Migration is that if you’ve ever listened to Scale The Summit before, it won’t blow you away. You’ll definitely enjoy the fuck out of it, though. That’s for sure.