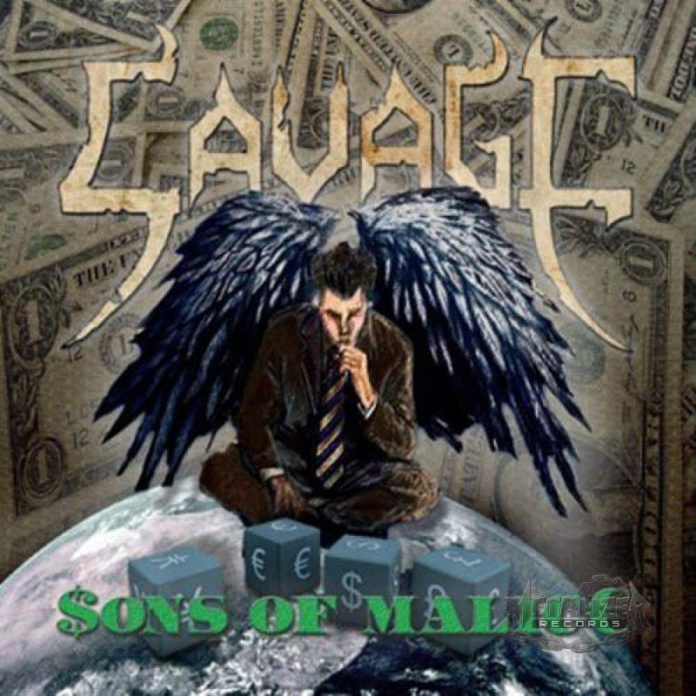 Rock is a lot like a well-tuned muscle car that your dad has in his garage; despite its age it can still make jaws drop, it can still pass by at blinding speeds, it can still make your heart stop. But just like real life, there are other cars on the road; some still in great shape after all these years, some… not so much. It’s in that sense that Savage fits in with their album Sons of Malice. Not to say that the once proud NWOBHM band should be run off the road, but Sons of Malice constantly suffers from false starts, sputters and at the very least needs to be taken into the garage for a tune-up.

Savage pull no punches as to what their musical style is, while they used to rock a straight up NWOBHM now it’s an altered version of  their heyday sound, this is without a doubt one of the biggest faults of the album; gone is the screaming production of the late 70’s early 80’s with the big reverb and cooking guitars, now replaced with a more confined and smaller sounding Savage.  It’s not that anyone expects Savage to maintain the sound of decades past but think Guns ‘n’ Roses meets Sister Sin in a very small room. The album never sounds as if it truly breathes; it sounds as if the sound is being projected from a small stereo as opposed to a large booming system, it’s a miniscule sound not only compared to previous works by Savage, but by the average band.

“Rage Within” kicks off with an upbeat intro and it seems like we’re all off to a great start; a driving riff with a great group vocals and a hell of a scream at the end.  But not long after the song is done, the problems start; at times the vocals fall flat and sound plain awkward, the rather monotone nature of the attacks not only leave me wanting more, but leave me thinking that the singer is looking at his watch in the recording booth, thinking he has better places to be. Regrettably, that push is only further cemented by the rather lack luster performance on most of the tracks.

It’s only much later until “Waking the Dead” that we’re actually treated to anything that remotely tries to grab our attention; the track, despite some flaws, actually rocks out in the manner that Savage is supposed to; hair down, balls out, and caution to the wind; they actually capture that certain area that NWOBHM occupies between late 70’s punk and traditional metal. But yet again, Savage fails to follow up to a great track in any respect. And though there are few other gems on the album, it’s now more than 2/3 of the way through the album and there isn’t much they can do to pull it back out of the dirt.

The strange thing about Sons of Malice, is that at no point does it feel like a genuine effort by the full band; when the singer is on, the riffs are bland and generic and vice versa. Rarely do they succeed in creating any type of unison; as a result most songs just drag into the other and before long you’re checking the track list to see how many songs are left.

All the pains one  experiences while listening to the album are only made more painful when you consider the past works of Savage, again, no one is saying that they want to hear Loose ‘n’ Lethal 30 years on but the audience still wants to hear the same quality in terms of songwriting. It’s not about replicating the sound, but problem solving in the same manner as they used to back in the day. In the end, not only will the band profit, but the fans as well.