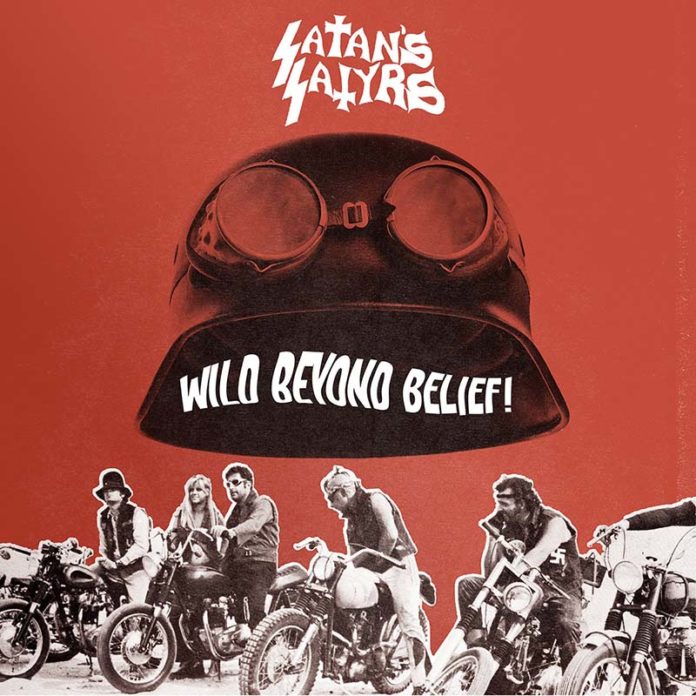 I’ve decided to save up and buy a Harley. Most people would buy motorcycles out of a desire for unbridled freedom, the wish to feel the wind in their hair and a gentle purring of a roaring motor under their crotch as they blast down the open road, heading wherever it takes them. That’s definitely part of the reason for sure, but it’s not the main thing driving me. I want to get a Harley for one reason and one reason only – so I can listen to the debut LP from Satan’s Satyrs the way it was intended; that is, roaring down the highway on a giant fucking chopper as I transform into a goddamn werewolf and howl out my lungs at the moon while chowing down on some delicious human flesh. I should probably work on becoming a werewolf too, come to think of it.

The first thing you’ll notice about Wild Beyond Belief! is how gloriously lo-fi it is in every respect. The guitars and bass blend together into a juggernaut of indistinguishable fuzzed-out riffage, while the drumkit sounds a lot like the same one Abbadon used on Venom’s Welcome to Hell. You know, the one made out of cardboard. And through it all Claythanas, the one-man band behind it all, screams in an unintelligible roar with the force of the possessed, while guitar solos rise out of the scuzzy swamp with plenty of wah-pedal fetishism. Satan’s Satyrs have crafted something that sounds like it was recorded in the dankest and darkest basement in the world, left to soak and age like a fine bourbon, and unleashed upon the unsuspecting world once fully matured into the raging beast it is today. If you prefer your production to be clean and sparkly you’re going to be extremely out of your element, but for those of you lusting after a filthy basement scuzz in your metal, breathe deep and enjoy.

The songs themselves roar out of the speakers with a punk-inspired brisk and energetic pace. They’re a very young band, and their youthful exuberance shines throughout the entire record. You can practically feel the wind on your face and the hog thrumming between your legs as you groove out to sonic monstrosities like “Sadist 69” and “Carnival of Souls,” while slower cuts like “Strange Robes” and “Bellydancer’s Delight” show off such a seductive and filthy groove that they sound almost like they could have come from the latest Electric Wizard record. Merging the riffs, grooves, fuzz, and cult-horror worship of stoner-doom with the unbridled energy, lo-fi production, and fuck-you attitude of garage punk like The Mummies and indie darlings The Reatards seems like such a natural fit that it’s impossible to believe that Satan’s Satyrs are the first band to accomplish it. But they pull it off almost flawlessly on their debut LP, and they’re sure to be cited as an influence by misfits, fuckups, and heshers all across the world for generations to come. As far as motorcycle mayhem music goes, this is really the last word. Steppenwolf can step the fuck aside.

Blind Guardian – Beyond the Red Mirror