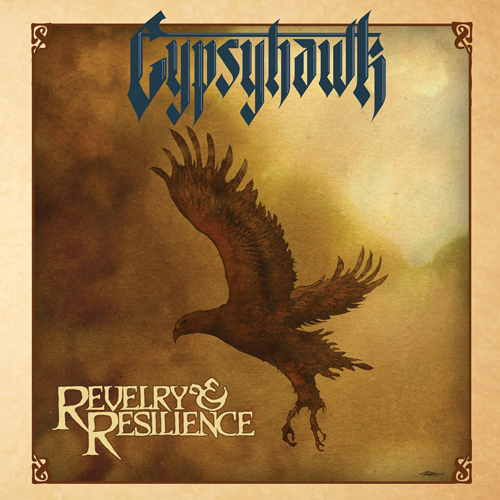 I know, I know, I’m incredibly late on this one, so I apologize.

Up until Metal Blade sent me this promo I was completely unaware of the existence of Gypsyhawk (although they released a previous album in 2010 titled “Patience and Perseverance”) so I had no idea about what to expect. When I saw that the the album’s blurb mentioned that they are “four metal dudes playing rock and roll and bringing the party every time they’re on the stage” I immediately rolled my eyes, expecting the worst, since it seemed like the kind of ridiculous thing that you’d find in a trailer for a shitty coming-of-age movie, which made me anticipate some crappy and juvenile party music.

I’m happy to say that I was wrong.

Far from being a juvenile band, Gypsyhawk actually presents a high-quality level of 70’s rock, although managing to keep it fresh and new, thus avoiding to be no more than a revival ensemble. It is as if the band decided to track down the sound of early heavy metal and update it in a masterful fashion.

Without being a revival record, the album is indeed full of “memories”; sort of footnotes in the sound that bring you back to the likes of Led Zepellin, Deep Purple and Thin Lizzy (hell, you’re almost waiting for them to just start singing “The Boys are Back in Town”). This has been accomplished not only by the songwriting, but also by a great production that highlights the raw and gritty vocals and creates a sound that fits perfectly in a turntable.

Lyrically the album is diverse, to say the least; while some of the songs are lighthearted, others draw inspiration from literature (e.g. George R.R. Martin’s “A song of Ice and Fire”) and even (allegedly) quantum physics. Their comment as to how can inspiration come from so many different sources is that “We fucking love smoking weed and drinking beer and having a good time, but at the same time we like to read books and play Magic: The Gathering, total nerd shit, and we like that to be a part of what we do with our music”. (( Far be it from me to question the strong link between nerds and metal).

In terms of music the band has demonstrated that they’re also good musicians, with clear progressive and psychedelic elements spread out throughout the album; while these may not place them in any “top 10” of their instrument of choice, it does showcase their undeniable skills and, most of all, passion.

Echoing what many others have said before me, I can’t really understand why Gypsyhawk chose to close the album with a cover of Rick Derringer’s “Rock and Roll, Hoochie Koo”, including eye-roll-inducing encouragement to “shhhhmoke weeeeed”. While nobody questions the quality of that song… it seems a bit out of place in the record. Next time try Zepellin.