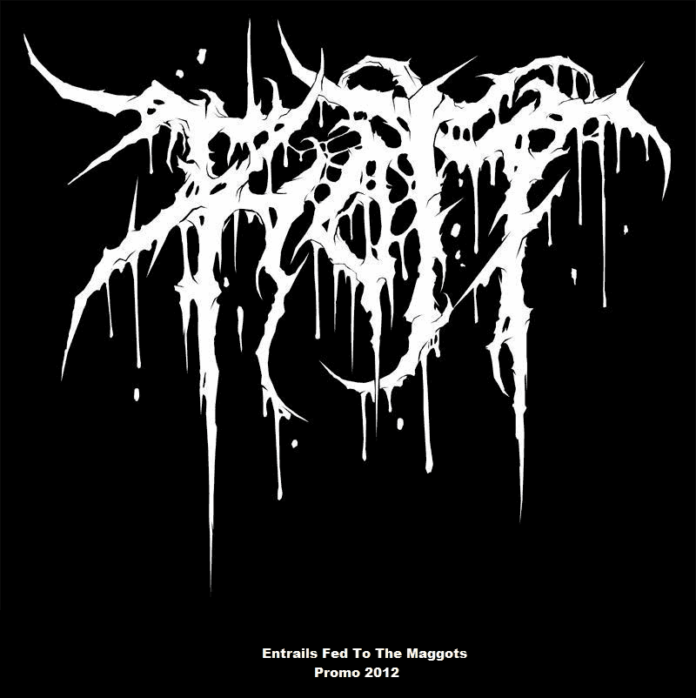 Hailing from the City of Angels, Rott sets out to destroy with their brand of California death metal that we are all very well acquainted with by now.  They have shared the stage with quite a few illustrious names that some of us would kill in order to play next to, and that should speak to the quality of music they produce.  I was given their 2012 promo, “Entrails Fed To The Maggots,” by none-other than Abel Garcia (guitar/vocals) and have conversed a few times over the past month or so, and he seems to have a good head on his shoulders.  Seeing as how they played a show just last night, I felt it was time to do my part in helping get the Rott name out there.

Upon beginning with ‘Displayed In Decay,’ I couldn’t help but notice that Rott doesn’t play the usual brutal death metal that one would expect.  While there are similarities with most known brutal death metal bands, they seem to play a less chaotic and more focused brand of it.  There is no mindless blasting, wanton riffing, or random instances of guttural clamor.  Everything has a purpose and is carefully positioned to make everything connect in a healthy fashion.  The title-track, ‘Entrails Fed To The Maggots,’ is done in the same way and was able to get my head nodding along with the music.  I dare say that Rott is very reminiscent of the now defunct Dissilience, except as mentioned before, more focused.

I can imagine Rott being pretty fun live, but I have to admit that I think the band would have benefited from a slightly less structured approach and let out their ‘wild’ side a little more.  The way the songs are made is entertaining, but there were a couple of points where I felt myself nodding off.  For that I can also blame the production being a bit weak, but I need to remember that’s a demo.  Some how I very much doubt that these two tracks are going to be entirely representative of the sound they will achieve in the future.

Other than those tiny hiccups, Rott are a competent brutal death metal band that hearkens to the usual forefathers that we all know and love, but are able to add their own personalized spin.  This is my first instance with the band, but it definitely will not be my last.