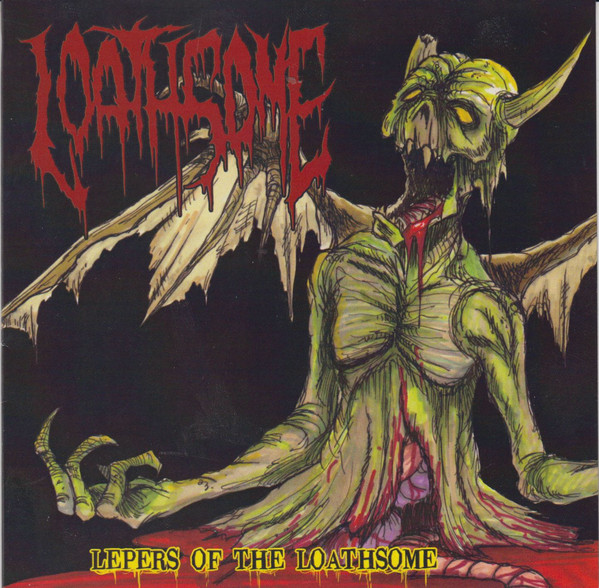 Loathsome are what I refer to as a Razorback Supergroup because three of the four members have worked with each other in some capacity through bands such as Decrepitaph, Wooden Stake, and Scaremaker.  Razorback Records has always been known as home to that type of dirty and horror influenced death metal, and Loathsome wants to continue that strong legacy.

Comprised of Vanessa Nocera (bass; Scaremaker, Wooden Stake), Wayne “Elektrokutioner” Sarantopoulos (guitar; Decrepitaph, Wooden Stake), David “Sinworm” Clark (drums; Decrepitaph, Sinworm), and just simply Nev (vocals; Kaiju), Loathsome take you on a disgusting tour of their decrepit death metal casket.  For those of you that are already familiar with some of the bands I mentioned, then you will feel right at home with the “Lepers of the Loathsome.”  The only thing that may through people off in a good way is the tinge of thrash metal that infests their brand of death metal, which helps in keeping the hooks energetic and catchy while the reverberated vocals and thunderous drums blow out your speakers.  Tracks like ‘Into the Sanatorium’ and ‘Alone in the Woods’ are the true stars in this demo because of the vicious approach the band took with them.

Loathsome are the musical equivalent to that scene in the original The Texas Chainsaw Massacre where Leatherface just pops out of no where and smashes that guys skull in with a hammer.  The reason I say this is that the music has a bass-heavy quality to it, which is in full-effect in ‘Alone in the Woods.’  Hearing Vanessa’s low-end in that song really helps the melodies in my eyes.  The guitar and drums are nice and thick, making sure that one is never confused about the type of death metal they are listening to.

If you are fan of any band that is signed to Razorback Records, then you will definitely enjoy the dirty death metal stylings of Loathsome.  I don’t even know what else to say other than go support the band on their Facebook.  Maybe they will get off their asses and get to work on an EP or full-length.